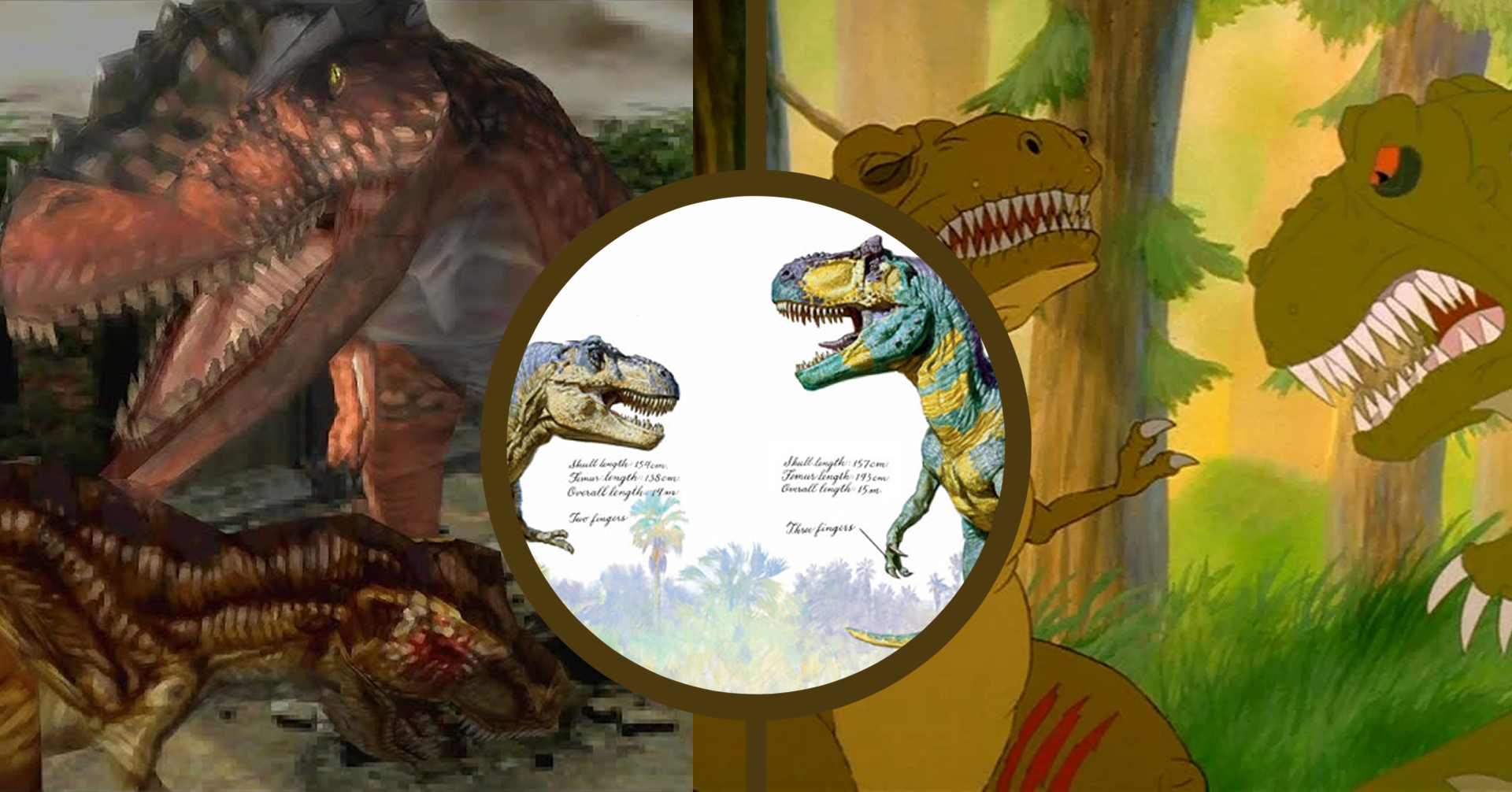 Giganotosaurus and Tyrannosaurus never met. Separating them is time (Giganotosaurus is from Cenomanian, T.rex is from Maastrichtian: a gap of ~30 milion years) and geography (one was discovered in Patagonia, the other in the north of the United States). This, of course, never stopped the mind of an hairless ape living many millions of years from both of them, and a comparison between these two animals was made even in the December 1997 issue of National Geographic, accompanied by James Gurney’s illustrations. It was not the last time that these two animals faced of, either for a comparison on their respective anatomical differences, or for a real clash. At first we thought to collect every single instance, but we quickly realized that in the twenty-five years since the discovery of Giganotosaurus these multiplied to the point that we were going to forgot some for sure, so we decided to limit ourselves to three:

In the second book of Dinotopia, Gurney gives us the first appearance of Giganotosaurus in media. Perhaps the author was working with Coria and Salgado to create the illustration above and therefore had access to the material before it was pubblished? We don’t know, but The World Beneath was published just a month after the description of Giganotosaurus. Within the novel, Arthur and Will Denson, exploring the Rainy Basin in search of a way to penetrate some ruins protected by a Tyrannosaurus, free a young Giganotosaurus blocked by some trees. The good deed is rewarded when the father, grateful, intervenes to drive away the T.rex.

In her quest to save the survivors of Edward City and the data about the Third Energy, Regina finds a file that mentions rumors about a dinosaur (a theropod, obliviously, otherwise there would not be much o a surprise) much larger than Tyrannosaurus, rumors validated by the discovery of a Tyrannosaurus carcass with bite marks. In the moment when Regina is cornered by the T.rex that until then had been the main antagonist of the game, the huge Giganotosaurus manifests itself, and – despite a weak resistance of the Tyrannosaurus – knocks it down with one single hit. The animal is much larger than its real-life counterpart (its head is twice as long as Regina is tall) and strong enough to withstand a missile explosion. No surprise, then, that it overwhelms the T.rex with such ease.

THE LAND BEFORE TIME V: THE MYSTERIOUS ISLAND (2002)

Driven away by a locust swarm (ehm ehm) which devoured all the vegetable matter, the community of herbivorous dinosaurs is forced to abandon the Great Valley. Littlefoot and his friends, separated from the rest of the pack, end up on a lush island… also home of Chomper, the little Tyrannosaurus we knewn in the second movie, of his parents, and of another large theropod. At the end of the movie, the new Sharptooth faces Chomper’s parents and, despite being able to stand his ground one by one, it’s eventually defeated and falls into the water. Although it’s never explicitly identified with its scientific name (like all the dinosaurs in the series), it’s called Giganotosaurus in the official Youtube channel of the series, and – although stylized – its design agrees with this interpretation, with a more irregular skull than that of T.rex and small, three-fingered forelimbs.

2 thoughts on “GIGANOTOSAURUS vs TYRANNOSAURUS REX: 3 times they met before JURASSIC WORLD DOMINION”