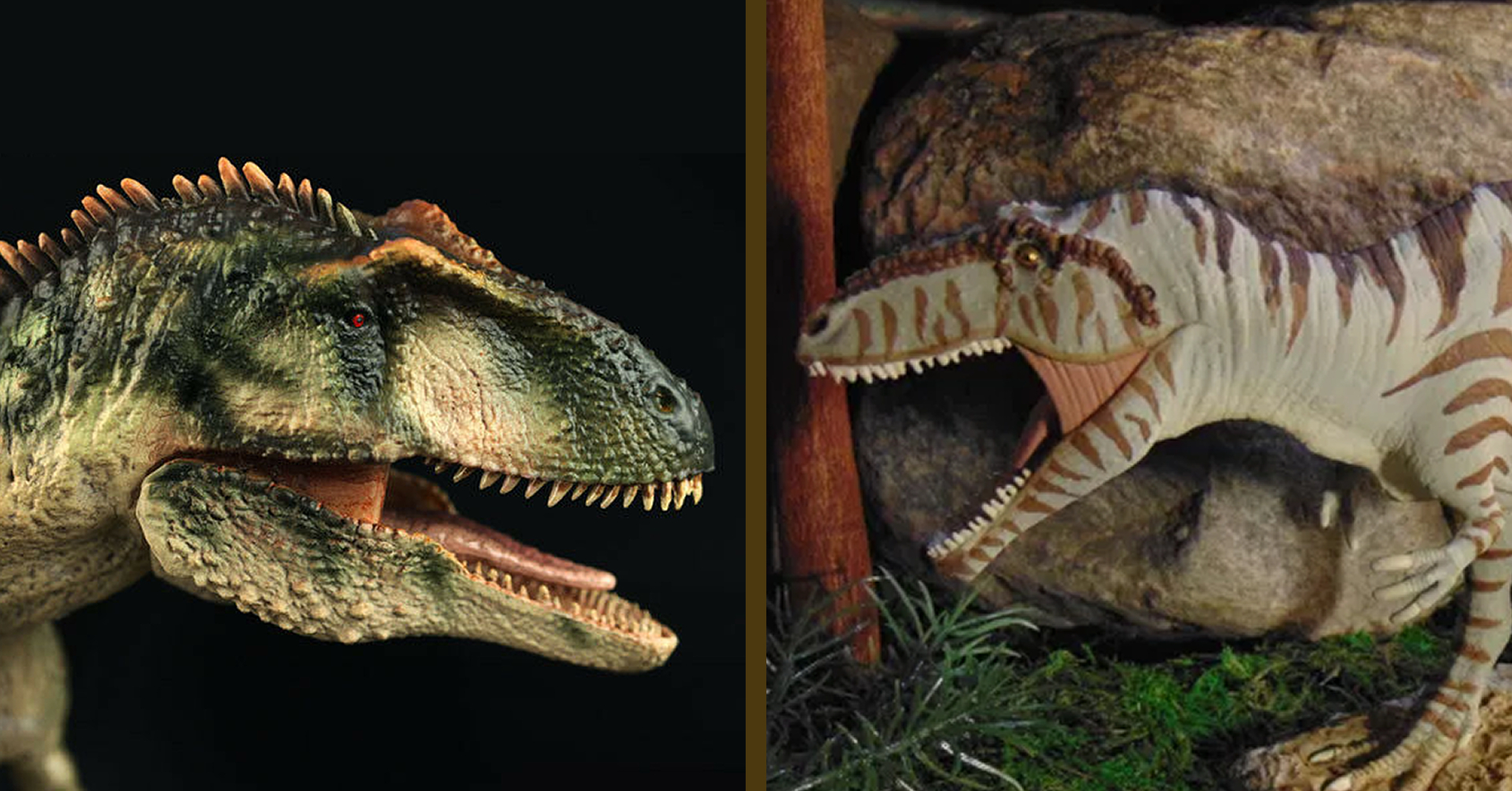 A few days after the news that among the new dinosaurs that will appear in Jurassic World: Dominion there will also be the Giganotosaurus, we wanted to retrace the different reproductions of this animal. Being more than you can imagine, it was necessary to divide everything into three parts, of which for the moment we had only published the first. So here’s the second part!

First Bullyland figure with articulated mandible. As interesting as the color scheme and arrangement of the osteoderms (inspired by the caiman lizard) are, the Sculpt does not fully reflect the characteristics of the animal and the way the eyes are painted gives it an unwavering expression.

Among the companies that have made reproductions of Giganotosaurus there is also the Italian Geoworld, unfortunately known to collectors above all for the repeated use of various Artworks as a reference for their figures.
In the case of the Giganotosaurus, whose Sculpt is still not very accurate, even if there is no absolute certainty, some resemblance to an Artwork by Sergey Krasovskiy could be identified (the strange arrangement of the forelimbs is an evident point in common).

Speaking of Artwork that have been a source of inspiration for toys and models, someone will notice the similarity of this toy with the DK statue, present in numerous books and among the first depictions of the animal after its discovery.
Lontic, which includes numerous copies of Jurassic Park /// Hasbro toys in its dinosaur line, has leveraged DK Model Designs for this and other dinosaurs, such as Suchomimus and Caudipteryx.

Ironically, another company also took over the design of the Giganotosaurus DK for an educational toy, later giving it the wrong name of T-Rex!

One of the Toob of Mini Figure CollectA also includes a Giganotosaurus, although in reality it is a miniaturized version of the Carcharodontosaurus: as such it has some substantial differences with the real Giganotosaurus, as well as showing all the characters that distinguish the Deluxe version , including shrink-wrapped head and extra wide hips.

Another Toob is that of Joy City Ltd, which among some Mini clearly inspired by Jurassic Park also contains a Giganotosaurus (the gray and black one).

With the Carnegie Collection closed, Safari Ltd. began offering their own versions of some previously made dinosaurs. The Giganotosaurus differs not only from the Carnegie version (in particular for the more robust build, the chromatic choice and the smoother texture), but also from most Safari theropods, as it is so far the only one equipped with a base. In terms of accuracy, it can be said that at the time he was the only one who could compete with the Carnegie, resulting among the best pre-review figures.
Being among the recommended purchases, we enclose a Link from AnimalFigures for Italian collectors.

Cheung Chung Tat, a famous Chinese paleoartist, and Vitae, who immediately established himself on the market with an incredibly accurate model (based on the Skeletal revised by Scott Hartman), with a crazy level of detail that we also find in the removable base.

The head, in particular, reflects the new proportions, on which it is believed that at first we let ourselves go to gain in length compared to the Tyrannosaurus rex. This change doesn’t make the animal any less terrifying, as this Close-Up demonstrates.

The model is also available in a limited edition, with a more varied colourway and a base full of extra greenery. After a period of silence, Vitae is back in the office and for those interested you can order this and other models by subscribing to our Facebook group ‘Orders of Dinosaur Models & Statues Group‘.

We conclude this second part with a particular product, taken from a Korean series in which small dinosaurs turn into machines (seriously!). The line of toys offers a truly varied sample of species and among these appears the Giganotosaurus, available in young and adult form.