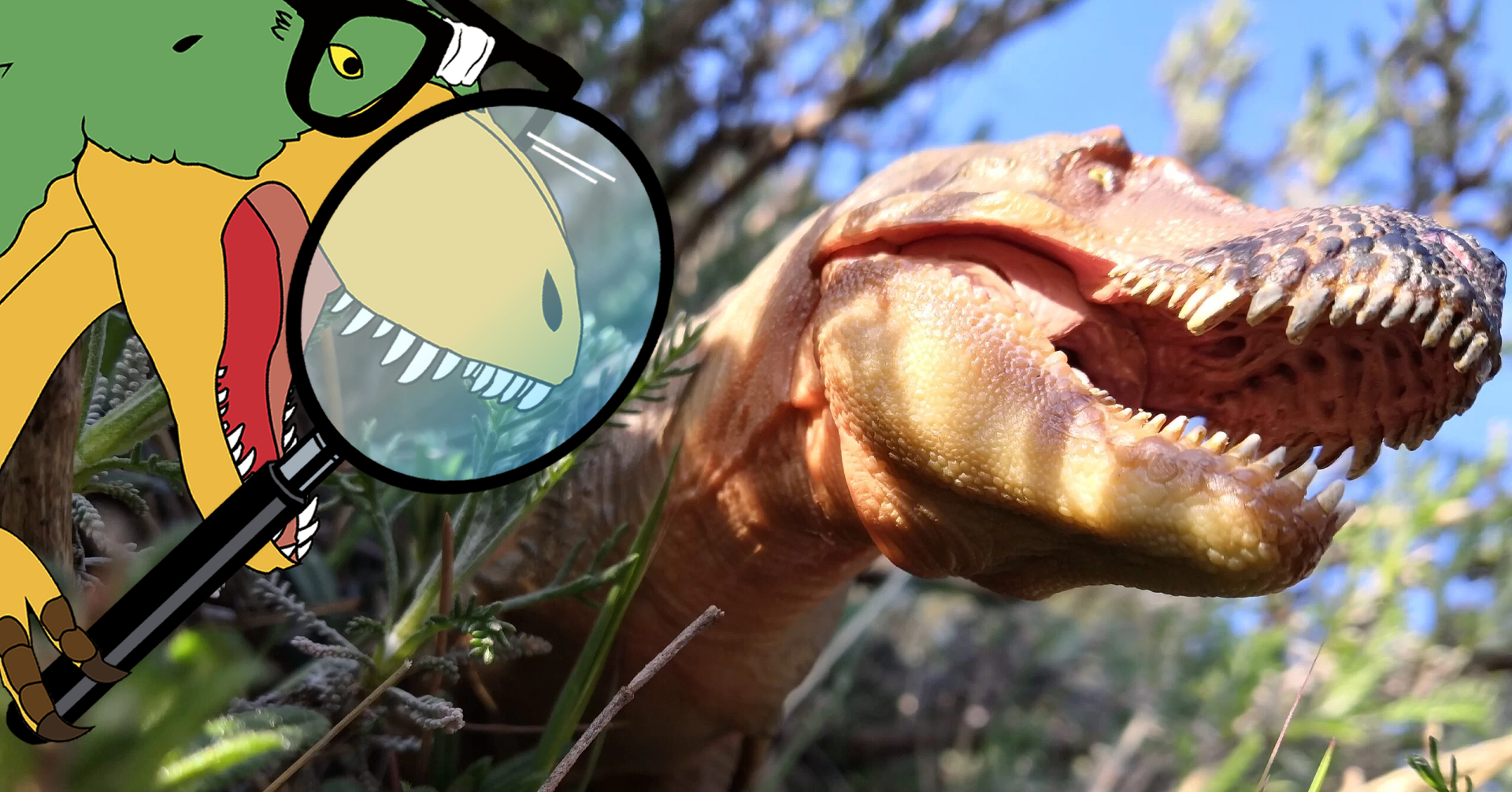 You didn’t have to wait for the publication dividing Tyrannosaurus into three species to have three giant tyrannosaurs. Since 2011, Zhuchengtyrannus magnus, the great tyrant of Zhucheng, has joined the king of tyrant lizards and Tarbosaurus, until then the only Asian counterpart! The discovery did not explode among the general public as might have been expected, perhaps because it was released on Aprol fools day and many thought it was a joke. In the study establishing this animal, only two bones of the skull, a maxilla and a dental one, are described, but they are enough to understand that this dinosaur was similar in size to Tarbosaurus and slightly less than the maximum of its North American cousin.

Although it is possible that Zhuchengtyrannus and Tarbosaurus coexisted, it is practically certain that the two were two distinct species thanks to the differences that can be seen when comparing the remains found. It may be strange that two very similar tyrannosaurs shared the same habitat, but even today in India there are both lions and tigers, and in the past the overlapping areas were even greater before man decimated these two big cats.

There are two characteristics that distinguish Zhuchengtyrannus from all other tyrannosaurs, both present in the maxillary bone: a shelf in the front of the bone and a hollow at the level of the maxillary window. So there is nothing distinguishable in a live animal and not representable in the model that we will now analyze.

Lu Xiong (from now on only Lu for simplicity) is the first 2022 theropod of the Prehistoric animal models line. The packaging is PNSO’s classic for this series. So a not too bulky box, a plastic blister that houses the model, a perch to ensure stability, a poster with an artistic image of the animal in question and an information booklet. These brochures are getting richer in content as time goes on, which is definitely good.

The first thing many collectors will have thought as soon as Lu was announced is that they could finally have a relatively cheap Tyrannosaurus PNSO when compared to Wilson or Andrea. Bingo. While the Tarbosaurus of the same line was clearly another animal, in this case there is really nothing that at first glance would suggest that what is in front of you is not a T. rex, if not the slightly smaller size compared to the true Tyrannosaurus of the PNSO. Even the coloring of the promotional photos was very similar to the rex of Walking With Dinosaurs. So if someone wanted to buy it with this idea in mind, he wouldn’t be wrong, quite the opposite.

This is not to say that this model is “just” an undercover T. rex. Unfortunately, from the fossil remains available there is no particular characteristic that allows us to clearly distinguish Zhuchengtyrannus from other tyrannosaurs in an in vivo representation. Dave Hone himself, the first author of the article establishing the genus, writes that other remains have been found in the area that can be attributed to some large tyrannosaurus, but they have no distinctive characteristics to be more precise. So you can’t blame PNSO if Lu is “too” similar to a Tyrannosaurus, they simply stick to the material available. On the other hand, taking the example of tigers and lions from before, if you only had skeletons available without having ever seen their appearance in life, I think no one could ever imagine how surprisingly different they look.

Not being able to focus on anatomy to make this model characteristic, PNSO worked a lot on the rest without distorting its classic approach. The pose portrays the dinosaur while walking but this time the animal is about to unload its weight on the leg placed forward, while the mass is still well loaded on the limb placed behind. The left foot position is flawless and particularly difficult to render well in both a drawing and in three dimensions, it seems taken from a still image of the walk of a large runner bird. The distance between the two feet is very limited, rather than marching in large strides it seems that the predator is approaching its prey cautiously. Personally I really appreciate this innovative choice, it makes the model stand out among the other PNSOs. Not to mention that the rendering of the feet is perfect. Shape, proportions, scales, nails and pads under the plant are an excellent combination of paleontological data and aesthetics of current birds. Only the coloring is a bit lacking in this area. In particular, it is questionable to have colored the nails with the same dark green tint used for the rest of the paw.

The appearance of the hind limbs and of the musculature in general has improved compared to Tarbosaurus. Lu is bulky but does not convey the idea of ​​a bodybuilder. The muscle mass is not well defined, the shapes are softened by what in life must have been subcutaneous connective tissue and the result is a more photorealistic reconstruction. Another difference is that Zhuchengtyrannus is taller than Tarbosaurus. This does not depend only on the pose, in an explanatory video on the creation of the model Zhao Chuang, the author, explains that there would be fossil remains of the legs of Zhuchengtyrannus that in proportion would have been longer than the other two giant tyrannosaurs. Unfortunately, no scientific article speaks specifically of this finding so we cannot verify this statement. However, it is not unlikely that a Chinese company such as PNSO could have had access to fossils excavated in that same country, fossils that perhaps are still in preparation or in study and not yet published. This would score points for the scientific accuracy of the model.

The tail is very good. It is well proportioned and above all it has an adequate width both at the base and continuing towards the tip. A horizontal furrow runs along its entire length and divides the very long muscle, above, from the caudofemoral, below. The curvature that becomes more pronounced towards the end creates a beautiful sinuous trend with the rest of the body. At the base and ventrallyther’s the cloaca, made more evident by a brighter orange in the color. Although perhaps not really among the priorities of an enthusiast, even this aspect of the reconstruction could be in line with scientific knowledge since in the study of the Psittacosaurus cloaca it is explained that that area of ​​the body had more traces of melanin, the pigment which darkens the skin. The classic band motif abused by PNSO returns in the coloring of the rest of the tail but this time it does not continue in the body and therefore is less monotonous.

There is little to say about body and arms. They fit perfectly within the standards of tyrannosaurs. The torso is broad and voluminous and tightens just before the pelvis. The forelimbs are short with the classic two fingers but still longer than those of Tarbosaurus which in proportion had them shorter than all the other tyrannosaurs. The color is not bad, the base is between yellow and light green and is more present in the lower part of the body and the tail, on the back and legs there is a darker green and the transition areas are of a brown that goes in orange. Only on the hands the paint was applied roughly. The color badly covers the outside of nails and fingers, while the inside has not been colored. This is not a particularly serious detail, heck they are talking about the fingers of the hand of a tyrannosaurus, but it is especially out of place compared to the care that is noted for other parts, the head in particular.

And so we come to the head. The shape is much more similar to that of Tyrannosaurus than that of Tarbosaurus, very large, especially in the back. From the data at our disposal, the two bones officially described, we cannot know if it is right or not. According to the most recent phylogenetic analyzes, Zhuchengtyrannus is similarly related to the other two giant tyrannosaurs. T. rex‘s head is peculiar even by tyrannosaur standards and this could lead to something more like Tarbosaurus or Daspletosaurus for Zhuchengtyrannus. On the other hand, the skeleton in the Geological Museum of China uses the Tyrannosaurus skull to complete the puzzle and nothing prevents us from thinking that, like the legs, there are other undescribed fossils that solve the dilemma which are still unknown to the general public. For the moment, therefore, let’s take this reconstruction as good, certainly we are within the limits of what is possible.

On an artistic level, the head is excellent especially with the mouth closed. The orange horns on the eyes and the central green ones are very beautiful. Even the large crocodile-style scales and the transition to the other smaller and denser ones are well rendered both in terms of sculpture and painting. There is no schrinkwrapping and the eyes are well centered giving excellent binocular vision in front view. The head continues in the neck, short and extremely massive without any particularly evident sutures. The joint of the jaw with the mouth closed is aesthetically improved compared to Tarbosaurus and even the muscles used to close the mouth this time were not extremely sacrificed to allow movement. The only small drawback is the presence of a slight overbite. With his mouth open, the appearance is just as good. The interior is extremely detailed with three choanas and folds of the skin. There is only one problem at the point where the palate joins the back of the mouth. Here between the two parts there is a small, slightly unsightly step.

Finally, it should be emphasized that the yield of the skin and scales in Lu is further improved compared to PNSO’s Tarbosaurus and once again the patterns reflect the indications given by the fossils in the other related genera. It is useless to dwell on lips and lack of feathers, the line followed by this company for large theropods is now clear, crocodile mouth and no feathers except for direct evidence that testifies to the contrary. It is a choice that you may or may not like, but nothing confirms or contradicts this line of thinking in a sure way.

We can only conclude by strongly recommending this model. Obviously, if you want a Zhuchengtyrannus in the collection, there is no alternative, but it also works perfectly as a replacement for Tyrannosaurus. The level of quality, the perfectly sized 1:35 scale, the pose and the not excessively high price since it is part of the Prehistoric animal line make it a real must have both for tyrannosaurus fans and also for those who simply collect. dinosaurs.