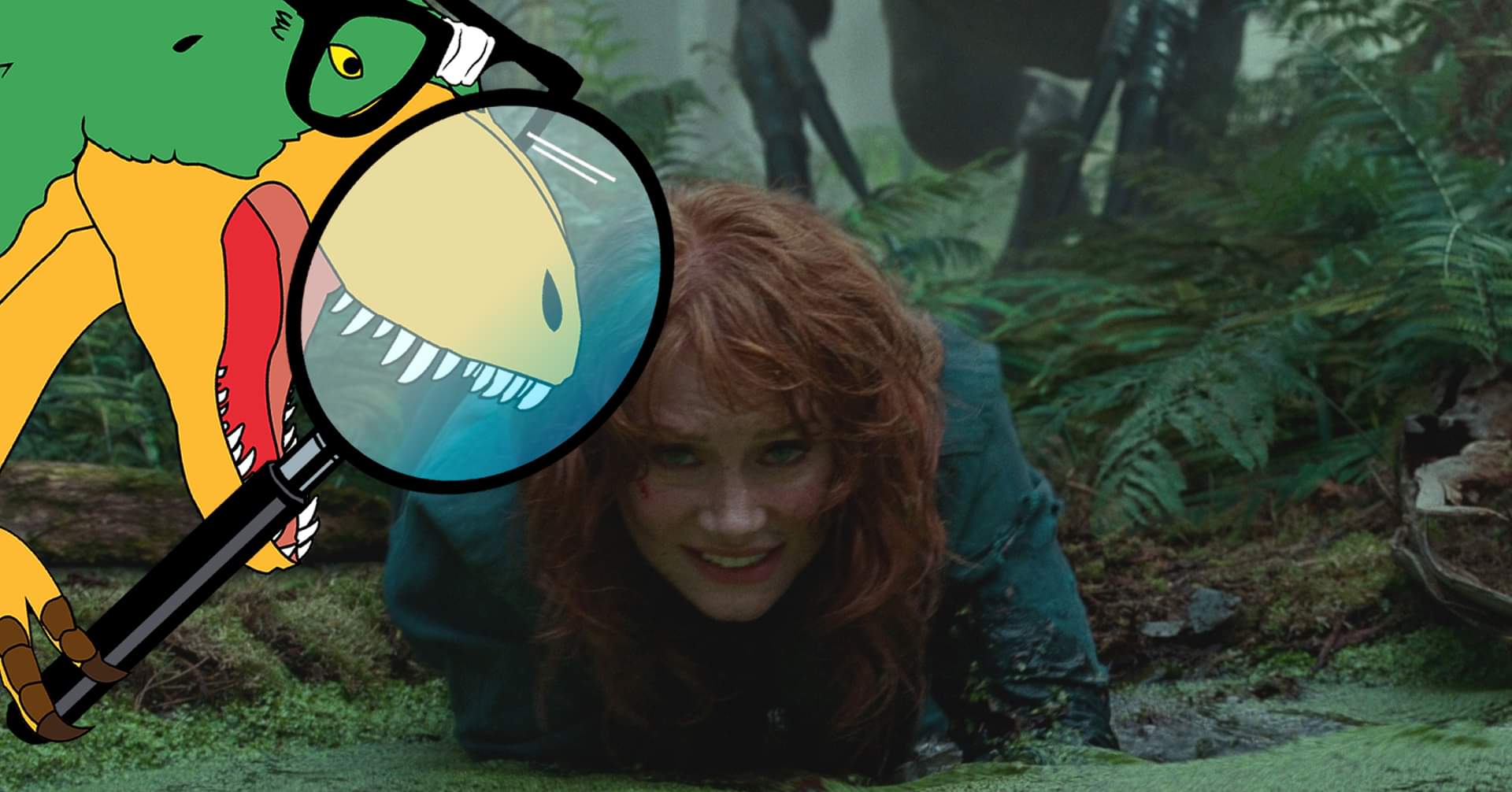 On May 31 I had the opportunity to attend the press screening of Jurassic World Dominion and I was able to watch the movie with my friends of Jurassic Park Italia. So here’s a review that will try to be as spoiler-free as possible. Those who follow us on our YouTube and Twitch channels know that the hype from the first trailer had dropped significantly with later releases, but the intense Prehistoric Planet week distracted me from seeing more promotional material, so I didn’t know more than what was shown in the two trailers and on DinoTracker.com.

As anticipated by the trailers, Battle At Big Rock and Dino Tracker, Jurassic World Dominion shows a world where de-extinct creatures are now free to roam, while introducing the mega-corporation BioSyn and its public image.

From there we are introduced to the current status of the franchise characters and the two main storylines: the first is basically a continuation of the events of Fallen Kingdom, with the Jurassic World characters bent on protecting Maisie, while the second brings the original Jurassic Park trio to come together and prevent an ecological catastrophe worse than how they imagined with the first park. In a certain way, it is as if on the one hand we’re witnessing Jurassic World 3, on the other hand a sort of Jurassic Park 4 within this new world.

All this becomes an excuse to bring characters and viewers into places and situations that we had never seen before in the franchise, and this is the main strength of this new Jurassic movie: the snow-capped mountains of the Sierra Nevada, the BioSyn Valley located in the inside the Dolomites in Italy, the streets of the island of Malta offer new visual cues and new interactions between dinosaurs and humans, with creatures of all shapes and sizes. Cinematography and direction also benefit a lot, with Trevorrow’s hand fortunately very different from what we saw in the first Jurassic World.

The main feeling is that the dinosaurs are an eye-catching accompanying element: it is true that on several occasions they represent a threat to the protagonists, but more because the latter practically bump into them in the midst of various intrigues and chases. However, to make this mix between a 007 action movie and a scientific thriller move around the world, the focus had to be upon the human characters, their goals and, in large part, their torments too, which must be seen as a huge step forward compared to the previous chapters of the new trilogy.

This does not mean that the film is free from defects: a lot, too much at once, and consequently some hasty passages, many things that happen for mere fan service, dialogues sometimes more confusing than anything else and a couple of facepalm scenes.

Unsurprisingly, part of these problems arises when Owen enters the scene, more and more OP than any dinosaur in the saga and, to be honest, a bit sterile when interacting with the rest of the cast: a few jokes, and the usual catchphrases, although nothing like the lava scene from Fallen Kingdom.

Surprisingly, it’s the original trio that brings a breath of fresh air: not only the plot involving Alan Grant, Ellie Sattler and Ian Malcolm takes up the critique on the economic exploitation of science in a more modern perspective, but the chemistry between the actors is such as not to make any of their scenes feel forced. Alan Grant is still a paleontology icon and Jeff Goldblum’s Dr. Ian Malcolm is a joyful sight: to quote my fellow viewer Alessandro Carpana, today’s Malcolm is to today’s Goldblum as 90’s Malcolm was to 90’s Goldblum, therefore how can you not love him?

Overall the female roles were the most interesting, with Laura Dern in particular stealing the show.

The new entries are also quite valid: Kayla Watts / DeWanda Wise and Ramsay / Mamoudou Athie stand out for the synergy with the rest of the cast, while Lewis Dodgson / Campbell Scott is immediately hated with the ways of CEO of the films. This time around, Henry Wu / BD Wong’s role is more humane, albeit less in-depth than one would expect.

Now, eventually you do plan to have dinosaurs on your dinosaur movie review, right? Without making too many spoilers, the new prehistoric reptiles introduced in Dominion (except Refrigeraptor) have some great scenes, although none are perfect. By an incredible paradox, the creature that works best is the Giganotosaurus, a triumph of osteoderms that nevertheless looks great in every scene. If Trevorrow hadn’t exasperated certain design choices in previous films, this dinosaur probably wouldn’t have received as much criticism. Another special mention goes to Therizinosaurus, which will soon become a fan-favorite.

Also in this case there is no lack of various cliches or WHAT THE…? moments, even though nothing comparable to certain parts of Jurassic World or Fallen Kingdom. A sad note here (unfortunately) are the animatronics: in this film they really give the impression of having been included more as an attempt to renew a tradition than for real usefulness and, apart from Dilophosaurus and Giganotosaurus, they al look very rubbery and stiff , creating an unfortunate contrast not only to the Stan Winston Studio’s masterpieces, but also to really great CGI – aside from Blue, which is terrible.

Michael Giacchino’s soundtrack is effective and his theme is always giving emotions, but don’t expect many references to Williams’ music.

In general it could be said that, if Jurassic World and Fallen Kingdom were questionable films with some interesting moments, Dominion is an interesting film with some questionable moments. Although there is a doubt that a second vision could bring other problems to light, at least there is the desire to watch it again, only this time it could be more for humans than for dinosaurs.