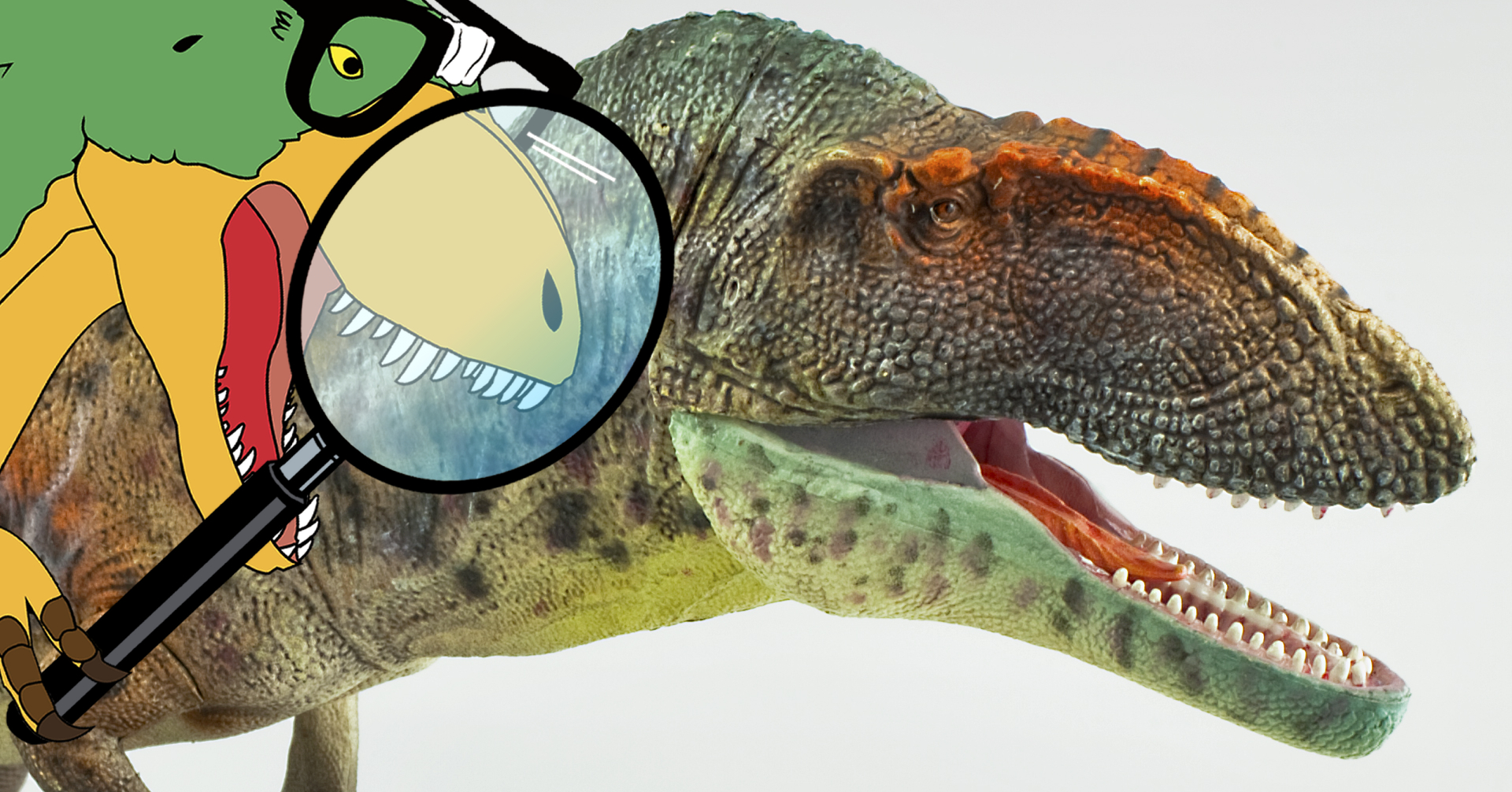 Let’s be crystal clear: Carcharodontosaurus saharicus (Depéret & Savornin, 1925) is one of those theropods that are far more famous than the completeness of their fossils justifies. The holotype (IPHG 1922 X46), found by Stromer in the Baharija formation of Egypt, was known for some bones of the skull, femur, a fibula, part of the pubis and ileum, and some vertebrae. Why “was”? Well, because it was in the same German museum where Spinosaurus was kept, and like Spinosaurus it was bombed during World War II. You know the story. Of the holotype, only the drawings of Stromer remain. In 1996 Paul Sereno established a neotype (UCRC PV12 = SGM-Din 1) on the basis of an incomplete skull, and this, together with scattered teeth and a piece of jawbone, is all we have of Carcharodontosaurus nowadays. Not much to work with, yet many have tried: twice Safari, and then PNSO, the upcoming Dino Hazard and this GR Toys. GR Toys is a Chinese company that jumped to the view last year for being the first to propose a Spinosaurus with the new tail morphology (from Ibrahim et al. 2019). Like Spinosaurus, there are two Carcharodontosaurus color variants: one green/orange and one blue. Let’s see how GR Toys fared with this enigmatic theropod.

Science is unlucky with Carcharodontosauridae. The only two members of this family that preserve an almost complete skull are Concavenator and Acrocanthosaurus, while for the others it’s necessary to resort to phylogenetic inference (that is, to use the most similar species as a reference). Was it not enough, there is the problem of their “extra large” status among the theropods, which leads to inevitable exaggerations: as was the case with Giganotosaurus, Carcharodontosaurus also was subject to a skull elongation in order to make it appear more impressive, and the restoration we see in many museums is “Pinocchio-like”, expecially in the premaxillary (the tip of the muzzle). We just had time to realize this error and correct Carcharodontosaurus on the basis of Sereno’s trawings and its relatives Giganotosaurus, Mapusaurus and Tyrannotitan, that a monograph on the Kem Kem formation (Ibrahim et al. 2020) reveals that the skull is way less complete than Sereno suggested from his illustrations, and that the remains in our possession can be rearranged in order to obtain a conformation more similar to Giganotosaurus and Mapusaurus. This does not mean that the Sereno’s restoration is necessarily wrong, but in paleontology the more conservative approach must be preferred, while waiting for new data.

The GR Toys’ skull fits quite well with the “Serene corrected” version of the Carcarodontosaurus skull. Although it is not the most recent version, it’s still a great achievment, if we think that i.e. the contemporary PNSO still has the “Pinocchio” skull. On the muzzle of the animal there are large scales, probably inspired by the studies on Neovenator foraminas. The nasal, lacrimal and postorbital crests are reinforced by what appears to be a keratinous covering. Personally, I would have insisted with the keratin, considering how wrinkled the bones of Carcharodontosaurus skull are. A small keratin horn, the presence of which is also proven by correlates, is located in correspondence with the jugal. The nostrils and the small ear openings are in the correct position. The jaw is articulated and the mouth opens wide to reveal the backward curved teeth that give the animal its name – although those of the GR Toys model are rather blunt – and a palate very similar to that of a current bird. I would have liked the choanas to be more highlighted, as well as some more details on the musculature at the corner of the mouth. In my specimen the jaws do not close completely but remain separated by only a few millimeters before the orbit, while in the model photographed by RobinGoodfellow_ (m) – whom we thank here – you can see a mouth that does not close at all. The model features lips covering the teeth when the jaws are closed. The presence of lips in theropods is a debated issue, with experts on one side on the fence and others at the opposite; we will only say that the teeth of the Carcharodontosauridae are proportionally small and therefore would not protrude much even if the model had no lips. Furthermore, the tip of the mandola does not exactly match the curve of the jaw and this detail is quite noticeable when the theropod has its mouth closed. Combined with the impossibility of fully clenching the jaws, it might suggest that it is better to expose it with its mouth open, a reasoning I made while observing the first photos that circulated online, but with the model in my hands I must admit that neither of the two details are particularly noticeable.

The neck is sturdy and muscular – a study reports that Carcharodontosaurus could have lifted up to 400 kg. Along the upper side run some rounded tubercles, which stop at the shoulders. Folds of skin run along the sides of the neck, while the underside is smooth – probably a necessity not to hinder the jaw joint, and heavily texturing the area not involved in the movement would have been jarring. There is little to say about the body of Carcharodontosaurus, given the scarcity of remains, and the GR Toys model harks back to a large generic Carcharodontosauridae. The body is not shrinkwrapped (more and more companies are thankfully abandoning the trend of making their dinosaurs look like mummies), although – touching the side – it’s possible to distinguish the swelling of the shoulder blades on the chest. Along the body the pattern already seen on the neck is repeated: larger scales in correspondence with the neural spines, flanks rich in skin folds with scales – proportionally – of medium size and a comparatively smooth abdomen with small scales. Personally – given the elongated neural spines known in Acrocanthosaurus, Tyrannotitan and Mapusaurus – I would have raised the back of the Carcharodontosaurus a bit, but the GR Toys sculptor preferred a more traditional approach. The dorsal view is congruent to the model developed by Bates et al. from Acrocanthosaurus.

The only large Carcharodontosauridae to preserve the entire forelimb is, again, Acrocanthosaurus, but what we know of Tyrannotitan and Mapusaurus confirms that they were stocky and sturdy, not much longer than the – often ridiculed – ones of Tyrannosaurus (but still functional , if compared with the atrophied ones of the Abelisauridae). They end with three hooked claws and appear to be covered on the back – the “seem” is mandatory, due to the dark color of the limbs and the size of the detail – by scutes similar to those found on the feet of modern birds (and which are actually a type of transformed plumage). The debate on the presence of any plumage structure in Concavenator is still open (although the latest publication on the subject leans towards a yes), and ultimately there is no evidence one way or the other. Bird-like scutes, on the other hand, are certainly present on the foot, confirmed by Concavenator – although I personally find the scutes a little too regular, like an ostrich, while structures more similar to that of an emu would have been more congruent. with those found in Concavenator. But these are minutiae. Inspired by terrestrial birds too is the recent trend of blunting the claws of the lower limb: they would consume walking. It’s hard to say if this was the idea of the GR Toys sculptor, because the claws of the right foot appear blunter than those of the left one. The leg is adequately sturdy, but it would not have hust a less clear demarcation between the thigh and the base of the tail: there inserts the caudofemoral, the largest muscle in today’s reptiles and generator of the walking thrust of these animals: and I’d say a seven-ton Carcharodontosaurus needed thrust to move! In this case, the performance of the PNSO model is more appreciable. Anyone who has followed my reviews for a while knows that among my obsessions are the scutes found under Concavenator’s tail – and applicable, by phylogenetic inference, at least to all Allosauroidea: unfortunately, the underside of the tail of this Carcharodontosaurus has the same kind of small scales featured on the abdomen. A pity. Under the base of the tail there is also the manufacturer’s logo, quite evident from the right side – I have to say – so much so that at first glance I thought it was the cloaca – which is instead absent.

The first thing many think when looking at the GR Toys Carcharodontosaurus is: it’s beautifully coloured! In fact, while it didn’t reach the levels of intricate painting of the promotional photos – photos that made more than one person doubt that it was truly a mass-produced model, because they were at the level of an hand-painted kit – it remains spectacular anyway and ath the moment I can’t think of any model – be it Papo, PNSO or any other company known for the detail of its coloring – that reaches its majesty. Some think that the blue version – or, as these detractors call it, rainbow version – is too bright, and they will be pleased with the green/orange version (at the time of writing this review not yet commercialized). The only detail of the colouration that clashes is the ice blue jaw, against the cream of the lower side, but I must say that with the model in hand it’s not as annoying as I imagined from the online photos. I also warn buyers that the painting is very delicate: my Carcharodontosaurus already had some chips as soon as it was taken out of the package, although I had purchased the boxed version and it had been properly packaged. The model is advertised in 1:35 scale, in reality it is closer to 1:32 if we consider it the neotype, while if it represented the lost example of Stromer it would be in 1:29 scale.

Is the GR Toys Carcharodontosaurus perfect? No. Is there room for improvement? Yes. However, for those who want a model of this African theropod, I would absolutely recommend it: its presence and the detail of the coloring will make it stand out in any collection.