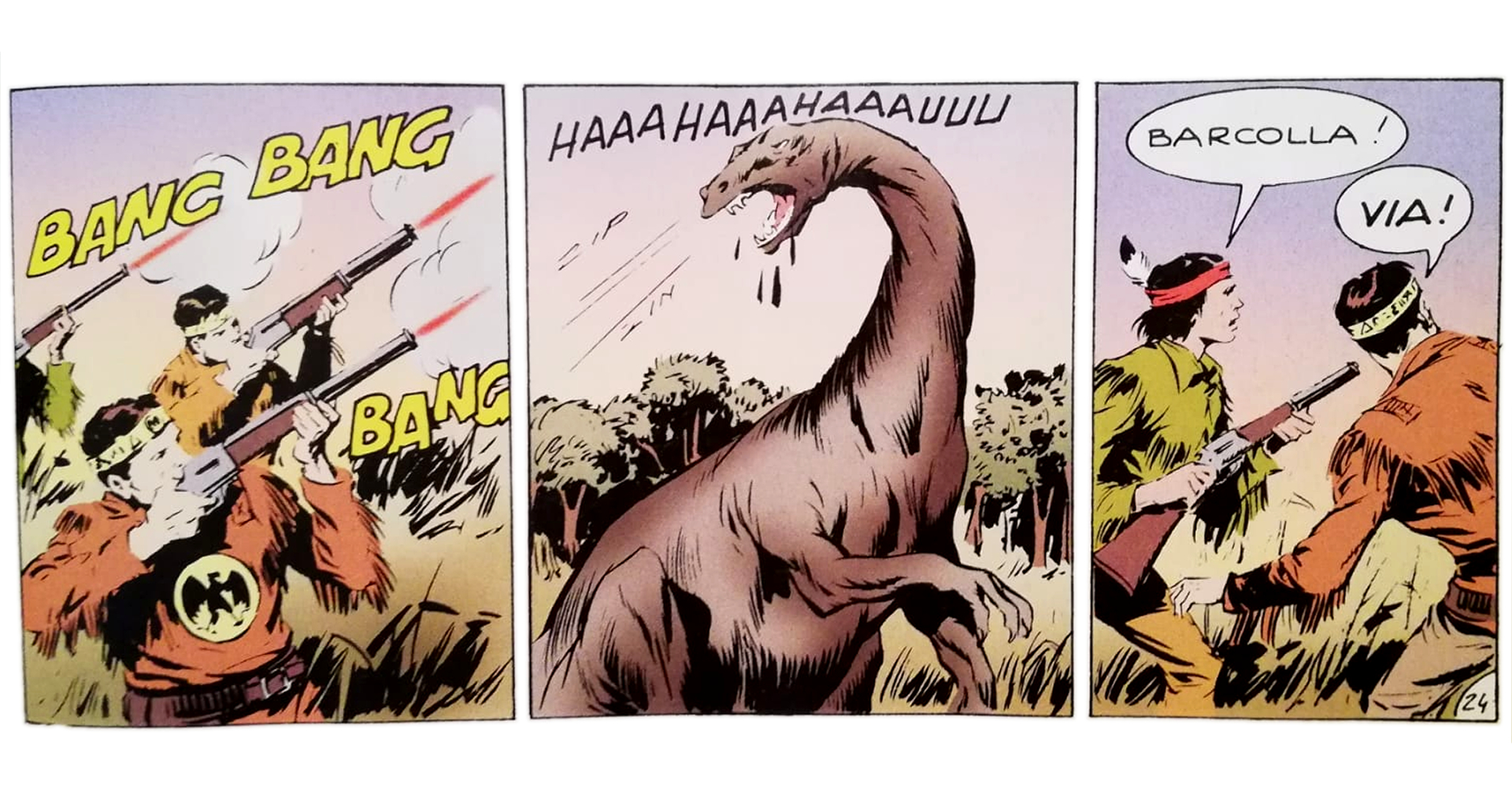 If you are a fan of comics, especially italians, you will most likely know the saga of Tex, the Italian western in which the cowboy and his companions live many adventures facing various enemies throughout shootings, monsters, magic and more. Created in 1948 by Luigi Bonelli and the cartoonist Aurelio Galleppini, Tex is one of the longest-running Italian comics ever, and is still published today by Sergio Bonelli Editore.

In his adventures, Tex has faced all kinds of antagonists, and since we are on Paleo Nerd, obviously we will tell about that time where he and his friends came face to face with dinosaurs and other giant monsters. This story is told in one of the very first issues of Tex ever released, the number 47, entitled “The lands of the abyss”, first released in 1960. This story will then be redistributed in number 24 of the historical color collection, with the title slightly changed to “The People of the Abyss”.

Before starting this story, let’s take a step back to the previous one: the three pards (a recurring term in the comics which means friends or companions) after defeating an evil witch, start to look for a mysterious gorge where natives had been sent from her to obtain some flowers capable of giving magical powers. When they find it, the three descend inside it with a rope.

After discovering an underground forest, the three find a large and mysterious footprint, and shortly after, they meet the one who left it: a huge bipedal dinosaur comes out of the wood to chase them down. In general panic, Tex and the others take refuge in the trees, while the monster, blinded by their gunshots, approaches the rope and breaks it with its arms.

Without their only escape route, the three pards will have to find another way, and while looking for it they come accross a horryfying scene: a dinosaur like the one met earlier lies without an arm next to another large lifeless reptile that is being devoured by four smaller dinosaurs.

After killing them all with shotguns and a keep walking through the wood, the three find themselves in front of a river. Continuing on their way, they come across a raft on the river with two people tied up on it. The three pards will manage to save them from the various monsters that live in the water.

The two new characters, Kotomi and Moya will tell them who they are and how they ended up there, and will also tell about the tribe of men who live in that abyss, the Makandra. Looking for a way out, Tex and the others will then be briefly attacked by other monsters and then by the Makandra themselves. What’s more, after the monsters and cavemen, the final enemy turns out to be a sismic activity that will cause a devastating flood which will destroy the Makandra’s village, and sadly even Kotomi and Moya will be among the victims.

Eventually, through a series of tunnels, the three pards manage to find their way out and leave that underground antediluvian world behind.

Brief analysis of the animals

The first of the dinosaurs to be shown closely resembles a non-sauropod sauropodomorph like Plateosaurus, although it is obviously much larger. It is not clear if he was just chasing the three pards out of his territory or if he was actively hunting them, but seeing that the dinosaur was drawn with sharp teeth the second option is the most likely.

The other dinosaurs shown are the carcass of a large dinosaur with pointy scales on its back (it’s not clear if it’s herbivorous or carnivorous, the head is never well shown) and the four smaller dinosaurs. They vaguely resemble the one without an arm, so they could be their offsprings, but they could also be a different species due to their coloration.

After the dinosaurs, let’s move on to the monsters: the first one is a giant snake, of which a skeleton in the forest is also shown earlier in the comic (obviously all intro and nice clean…). Its dimensions are comparable if not superior to that of the largest snake that ever lived, Titanoboa cerrejonensis, although when the comic was produced, the Titanoboa had not yet been discovered (it will be described in 2009). Last detail, the Titanoboa belonged in the Boidae family, which are not venomous, while it can be guessed from the teeth that the snake in the comic is a giant version of a generic venomous snake.

The second one is a giant iguana, which closely resembles a Galapagos marine iguana (Amblyrhynchus cristatus). Apparently giant versions of living reptiles were quite common in comics and movies at the time, just think of movies like A Million Years Ago (1940), Journey to the Center of the Earth (1959) and The Lost World (1960).

The third and last monster, the largest and most interesting (and also my favorite), is a large marine reptile called Protosaurus, whose appearance is taken directly from the illustrations of mosasaurs of the time, such as those of Charles Knight and Zdenek Burian. The most interesting thing is that there is actually a mosasaur with a very similar name, called Plotosaurus, described in 1937, while the name Protosaurus is just an invention.

The last animals that are shown are giant generic crabs (there is not much more to say about them) that are defeated in a short time. Coincidentally, in 1961, a year after the comic’s release, one of the animals that appears in the movie “The Mysterious Island” is a giant crab, animated in stop motion by the one and only Ray Harryhausen.

Although Tex would have gladly avoided other encounters with dinosaurs and monsters alike in his adventures, Bonelli had other ideas in mind. After all, subjects like dinosaurs and monsters are too good to be used only once, and in fact this won’t be the only time he will have to deal with extinct creatures … But that’s a story for another time.