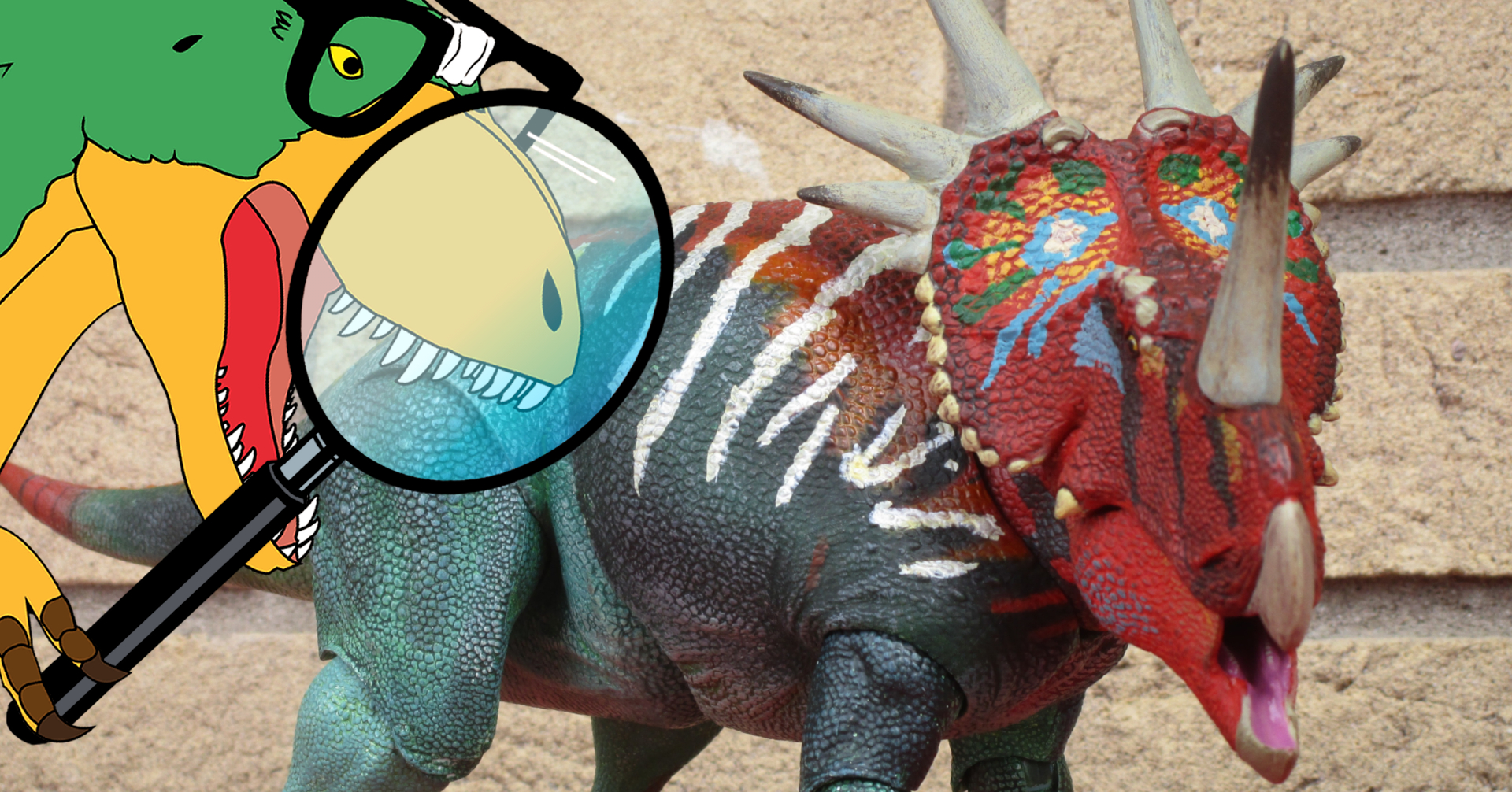 Later on, there have been some challengers (such as Pachyrinosaurus), but the most famous ceratopsian after Triceratops remains Styracosaurus. All major brands made their own version, with several excellent restorations such as Battat’s, Carnegie’s, Safari’s, and PNSO’s. This genus probably depends on its ornamentation, at the same time eccentric and immediately distinguishable from that of Triceratops, even for a layman. Therefore Styracosaurus could not be absent in a line dedicated specifically to ceratopsids.

The BOTM Styracosaurus is sold in a cardboard package, wrapped in another cardboard band that shows on the front the artwork (by Carlo Arellano) and on the back some information about this animal. The actual packaging has a transparent window on the front and a checklist of the other wave 1 ceratopsians on the back. Inside the box, the Styracosaurus is kept in its place by plastic trails. The tail is detached to save space. Included are instructions for easy assembly and a collectible card reproducing the artwork.

The digital model of Styracosaurus was made by Jacob Baardse, while the sculpture of the skull is by Raul Ramos. David Silva sculpted the details. In Styracosaurus there is a huge variety in the shape and arrangement of the nasal horn and epiparietals (the horns that sprout from the collar), and it’s clear that the restoration is based on CMN 344, the holotype of Styracosaurus albertensis – unlike other models (such as the PNSO), which are based on AMNH 5372.

The concept art of this model is based, apparently, on Gregory S. Paul’s skeletal. It’s quite often assumed – mistakenly – that ceratopsids are all the same apart for the head, but fortunately in a series dedicated to them we were spared of this mistake: the BOTM Styracosaurus has a centrosaurino anatomy (note, for example, how the tail is longer than Triceratops’), and there are several details that emphasize the attention paid to the reconstruction. On the hands not only there are claws just on the first three fingers (a detail that in 2022 one would expect from all brands, but some persist in getting it wrond), but it is also crescent-shaped, when other restorations show elephant- or rhino-like padded hands (incorrect) even when the number of claws is correct.

Another detail that shows how well researched this restoration is is the integument of the skull: Silva clearly used Hieronymus et al. (2009), a study that – although not specifically on Styracosaurus – was done on the related genera Centrosaurus and Einiosaurus, from which we can infer traits that were probably present in Styracosaurus, too: the model shows, between the beak and the nasal horn, a keratinous plaque, while above the eyes there are large scales that in the fossil are highlighted by a texture similar to that found on the skulls of musk oxen, mouflons, and iguanid lizards. Another row of scales, indicated by the correlates too, runs from the base to the top of the frill, along the midline of the skull. If there is one thing that perplexes me, is the decision to paint some of these large scales with a gray similar to the beak and horns and others of the same color for the skin: I can’t find a scientific explanation for this choice (histologically, it would all have been been the same tissue), so it’s probably an artistic choice. In the skull, you can also see the huge nostril that characterizes the ceratopsids: Silva made use of Witmer (2001), and therefore the nostril is positioned much lower than the older restoration, which put it in the center of the nasal opening. The ear is also in the right position, and it’s a detail quite easy to get wrong in ceratopsids (just have a look at Jurassic World Evolution’s Pentaceratops).

Speaking of integument, we have no impression of Styracosaurus’ skin, but we have of the similar genus Centrosaurus, and it shows polygonal scales interspersed with larger studs (much smaller than those of Triceratops).

Styracosaurus is a medium-sized ceratopsid (the holotype CMN 344 is 5 meters long), and in the Beasts of the Mesozoic line is median position among the centrosaurines: not as small as Einiosaurus, but not as large as Pachyrhinosaurus. Its bright colors, the first thing you’ll probably note, are inspired by agamid Calotes calotes. The paint app is generally good and has interesting details – for example, the slightly darker streaks on the thigh, which are hard to notice at first glance – but also some flaws: as you can see from the photos, the model I received had several abrasions (they were all there when I pulled it out of the box and are not dependent on my manipulation). A quick comparison with photos on the internet confirmed me that other differences with the prototype (such as the fact that the green of the chest does not match that of the abdomen) are common to all specimens and therefore due to mass production.

I should add that this coloring inspired the one present in the first episode of the “Dinosauria” cortos (Old Buck), as a sort of tribute to the fact that the author used this model to figure proportions and poses. To celebrate this fact, Silva will release in the current year a variant of this model with a new skull and a coloring that directly reflects that of Old Buck.

The BOTM Styracosaurus has twenty points of articulation. Compared to other BOTM ceratopsians, the livery is mostly safe from unmatchung stripes on the limbs, leaving this small problem only on the back and especially at the base of the tail, where a yellow and a red spot are truncated in half to give way to a darker orange streak. These two areas, anyway, are less rotated in most posed than the legs, so I can live with it. The only articulations I’m really not happy with are the neck one, which does not allow the model to lower the head as many would like, and the jaw, which does not close completely. Apart from this, this Styracosaurus can be posed almost as you like – as you can see from the photos – making it perfect for a diorama or as a reference for an illustration.