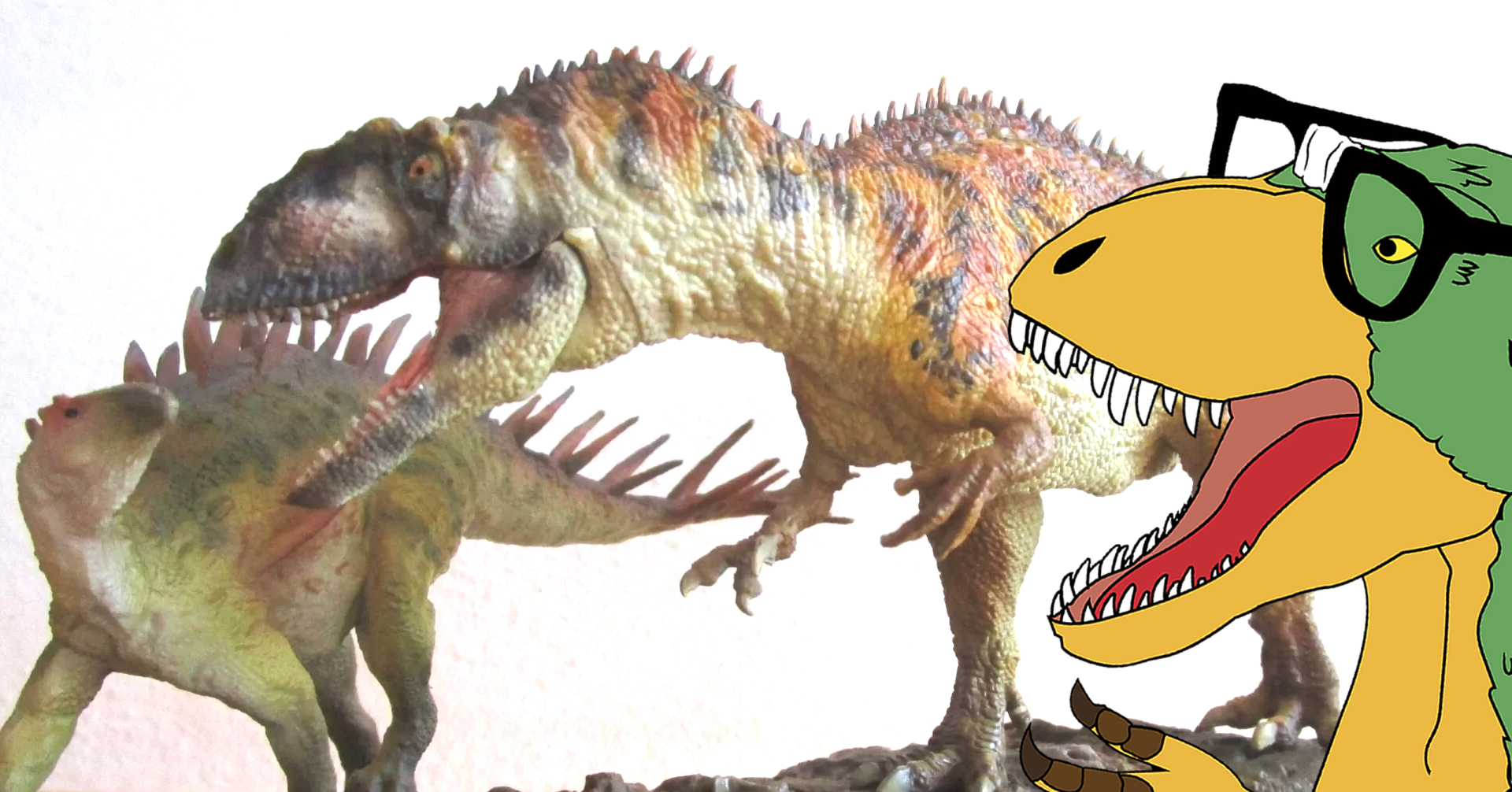 PNSO’s “Dayong the Yangchuanosaurus and Xiaobei the Chungkinggosaurus” set is one of the models sold under the brand “Dinosaur Museum Series”. The sculptures were until recently believed to be the work of Zhao Chuang himself, but a recent post by acro-man user on Dinosaur Toy Forum explained that Chuang is primarily an illustrator and a full-scale sculptor, while many of the models on a smaller suggests that this is one of the cases in which the model is the work of Zhao Chuang himself (at least as far as the Yangchuanosaurus is concerned).

The package is made of cardboard, white in color. On the upper side there is a photo of the assembled set, while on the back there is writing in chinese. Once the lid has been lifted, the models are placed in white foam, which protects them during the shipment: although my box suffered a slight damage at an angle during shipping, the models were not affected. In the box there are Yangchuanosaurus, Chungkingosaurus, the base, a plastic form to prevent the Yangchuanosaurus limbs from wariping during the transport and a bilingual explanatory booklet (English/Chinese), printed in glossy paper, with the story of the fossils’ discovery (in rather romanced terms), some words on the objectives of the PNSO and skeletal of the two animals accompanied by a human silhouette for size comparison.

Yangchuanosaurus is clearly the star of the set. Discovered in 1978 (Dong et al.) in China, this theropod was alligned to Ceratosauridae (Paul, 1988) only to be recognized as member of Sinraptoridae (later renamed Metriacanthosauridae for priority reasons) with the discovery of the related genus Sinraptor. It was made in the form of a PVC figure two more times, by Safari LTD in 1993 and by Colorata in 2009.

Two specimen are assigned to this animal, the holotype (CV 00215), which is ca. eight meters long, and the referred specimen CV 00216 (former holotype of Yangchuanosaurus magnus [CORSIVO]). It’s curious that the holotype (the smaller specimen) has a 78 cm skull and an 85 cm femur, while the referred (and larger) specimen shows a 110 cm (incomplete) skull (lower jaw: 107 cm) and a 95 cm femur, implying a rather serious change in the animal morphology during growth. Too bad that the PNSO model does not fit perfectly with either animal: it does not have the absurd proportions of CV 00216 and the size (in relation to Chungkingosaurus) aligns better with CV 00215, but – on the other hand – its neck is too short to represent CV 00216 (in the ontogenesis of theropods we observe a shortening of the neck in adults), as well as a pheraps too elongated skull. As I said, its proportions do not reflect the most recent skeletals of this animal, but are rather similar to the restoration in Paul, 2016. Given the high popularity of G.S. Paul’s work, it’s not surprising that it was used as a reference, if so happened, but more research would have been welcomed.

The model is sculpted in rigid PVC, which allows a high level of detail. Caution is advised in handling, as the stiffness of the material could result in conspicuous damage if it falls. The length, from head to tail and following the curve of the body, is about 27 cm.

If we take a closer look at the model, it’s clear that – even if 2019 is practically around the corner – we are speaking of different era of PNSO models, beginning with shrinkwapping (although it could be worse) and then passing to the twisted pose and the deeply engraved details.

The orange eyes could have been painted with more care, and they are a bit of letoff when compared to the detail of the body coloring; I was lucky, but I saw some copies with badly printed eyes, and it is a quite difficult detail to conceal and one which risks to compromise the look of the whole model. The nostrils and the ear openings are in the correct position. The jaw is articulated and opens up to about 45 °, a remarkable angle that reminds the viewers of the tremendous gape of Allosauroidea (almost 180 ° in Allosaurus!). The model features lips – a character whose presence is still debated and lacking in more recent PNSOs, supporting the idea that Yangchuanosaurus was sculpted in another “era” – concealing the teeth. The teeth appear individually scukpted in the upper jaw, while in the lower jaw they are enclosed in the gum tissue, a detail that recalls modern predatory reptiles (for example the monitor lizards). The inside of the mouth – and, for reasons not entirely clear to me, the region around the eyes – has a layer of glossy paint, to increase its realism. Particularly noteworthy is the presence of choanae on the palate, a detail often overlooked.

Starting from the back of the head and running up to two thirds of the tail there is a series of keratin spikes. We have no Yanchuanosaurus skin impressions, and no theropod impression shows similar structures (the closest one belong to an undetermined Diplodocidae), so they can be considered an artistic license. It is notewhorty how the spines are irregular, varying in height and curving slightly to the side, which is a common imperfection in modern reptiles that show similar characteristics: it helps to give the model a real animal appearance, with its own history, not an idealized image. Along the back, at the base of the neural spines, there is also a row of large scales, reminiscent of the tubercles of Carnotaurus. Again, a speculation on the part of the sculptor. The rest of the skin is deeply engraved by grooves (a typical feature of Zhao Chuang’s works) and by rectangular scales which, although too large for a theropod (the footprints we have show millimetric scales, almost invisible – unless the observer is in serious danger from the animal!) give the sculpture a detailed look that some will surely appreciate. As far as I’m concerned, both these and the spikes could have been omitted, but I admit that the look is pleasant and that the size of the scales is not too disturbing. Under the pubic boot there are larger scales, vaguely reminiscent of those found on Concavenator’s tail.

The forelegs have toes of the appropriate length and number of phalanges and – common for PNSOs – are contracted rather than in the resting position of theropods. Since the diorama represents an attack, it can fit, although it is believed that the forelimbs were kept relaxed when not in use, and only functioned after the skull had struck a first blow. The second and third toes have shields (those flat scales seen on birds’ legs), but strangely the first does not. The presence of scutes – which are modified feathers, rather than actual scales – is speculative, since we don’t know if Yangchuanosaurus had feathered ancestors or was feathered himself. The scutes are also present on the toes of the hind limb.

Chungkingosaurus is a stegosauridae described by Dong et al. in 1983. It is known for three examples (CV 205, CV 207, CV 208), none of them complete. The size of the ilium / sacral block (less than half of the contemporary Tuojiangosaurus), combined with the degree of bone fusion, suggests that Chungkingosaurus was among the smallest stegosaurids. In contrast, Paul (2016) considers Chungkingosaurus to be a sub-adult of Tuojiangosaurus. The length is estimated around four meters. It was previously made of PVC only once, by the PNSO itself, in a larger scale model. Given the incompleteness of the fossils, it is difficult to assess the correctness of this model, which appears to be a smaller-scale but modified version of a sculpture that appeared in multiple PNSO exhibitions (for example, the mouth is closed). The material is a softer PVC than that of Yangchuanosaurus, perhaps so as not to risk damaging the spines – even if the theropod has equally fragile details despite the stiffer material – and for this reason, the level of detail appears lower. The length from head to tail is about 17cm.

It is almost impossible, given the size and level of detail, to understand whether or not the model shows a horny beak. Under the typical stegosaurus head, Chungkingosaurus appears to have the osteoderms found only in Stegosaurus that protect the neck, but it could also be a simple throat pouch. From the nape there are two paired rows – typical of Chinese Stegosauridae and unlike genera such as Stegosaurus – of bony plates and spines. The color makes them difficult to tell apart and the transition is smooth, but the model would appear to feature a thagomizer with six spines. There is discussion about the number of spines that Chungkingosaurus’ tail would end with, with numbers ranging from four to eight. Six is ​​a common number I saw him rebuild with. Up to the ninth dorsal plate, along the flanks there are also multiple osteoderms or raised scales (to distinguish them, technically, is the fact that they have a bone core or not, which is obviously impossible to verify in the model), which are transformed into a single row and then they end at the twelfth bone plate. The only stegosauridae to certainly present osteoderms along the flanks is the basal Huayangosaurus; fossils not described would seem to suggest their presence in a Stegosauridae found in the Sichuan province, but – until there is a publication that assigns them to a specific genus – the presence of this feature in Chungkingosaurus is to be considered speculative. At the base of the forelimbs two long spines emerge: this character, called parascapular spines, is common in the Stegosauridae, but again there are no fossils that confirm or deny it for this genus. The hand correctly has four fingers, but it seems to carry a claw on the third finger as well: the hand of the Stegosauridae only had nails on the first two fingers, but the detail is so minute that I could be wrong. Stegosaurs are often represented with elephantine limbs, but it is a mistake: the hand had a semicircular conformation similar to that of sauropods, and – despite its small size – this detail is faithfully reported in the PNSO model.

The base represents the ground of a forest, with branches and a fallen trunk. It is painted fairly superficially, albeit convincingly from a distance, with only the trunk in a different color. Chungkingosaurus rests firmly in the prepared footprints, but there is a metal pin in which to insert the left foot of Yangchuanosaurus. Unfortunately, one pin alone is not enough and it is almost inevitable that the model will soon begin to fold on its side, given the pose. Another criticism is the fact that the base is made of simple PVC, when competing companies produce models at similar prices but with the base made of resin, which allows a much higher level of realism (see, for example, the bases of Vitae and REBOR).

Ultimately, as much as I may like the attention shown for two genres that certainly don’t get much attention from the manufacturers, and as much as the detail is appreciable, I can’t help but think that the $ 65 requested on Amazon.com are too high a price for the general quality. The price would have already been more justified if Chungkingosaurus had been made of the same material and with the same finesse of detail as Yangchuanosaurus and, above all, if a second pin had been added for Yangchuanosaurus, preventing the need to resort to home remedies to prevent the figure. to fall. It is well known that PVC tends to bend and I wouldn’t have blamed it if this were a base-less model, but this diorama is one of the few cases where something could have been done to curb the problem – or at least try. Fortunately it can be found on Aliexpress at lower prices, and in this case it is definitely recommended, it is a very impressive diorama of a scene that could have taken place in the Sichuan Oxfordian.