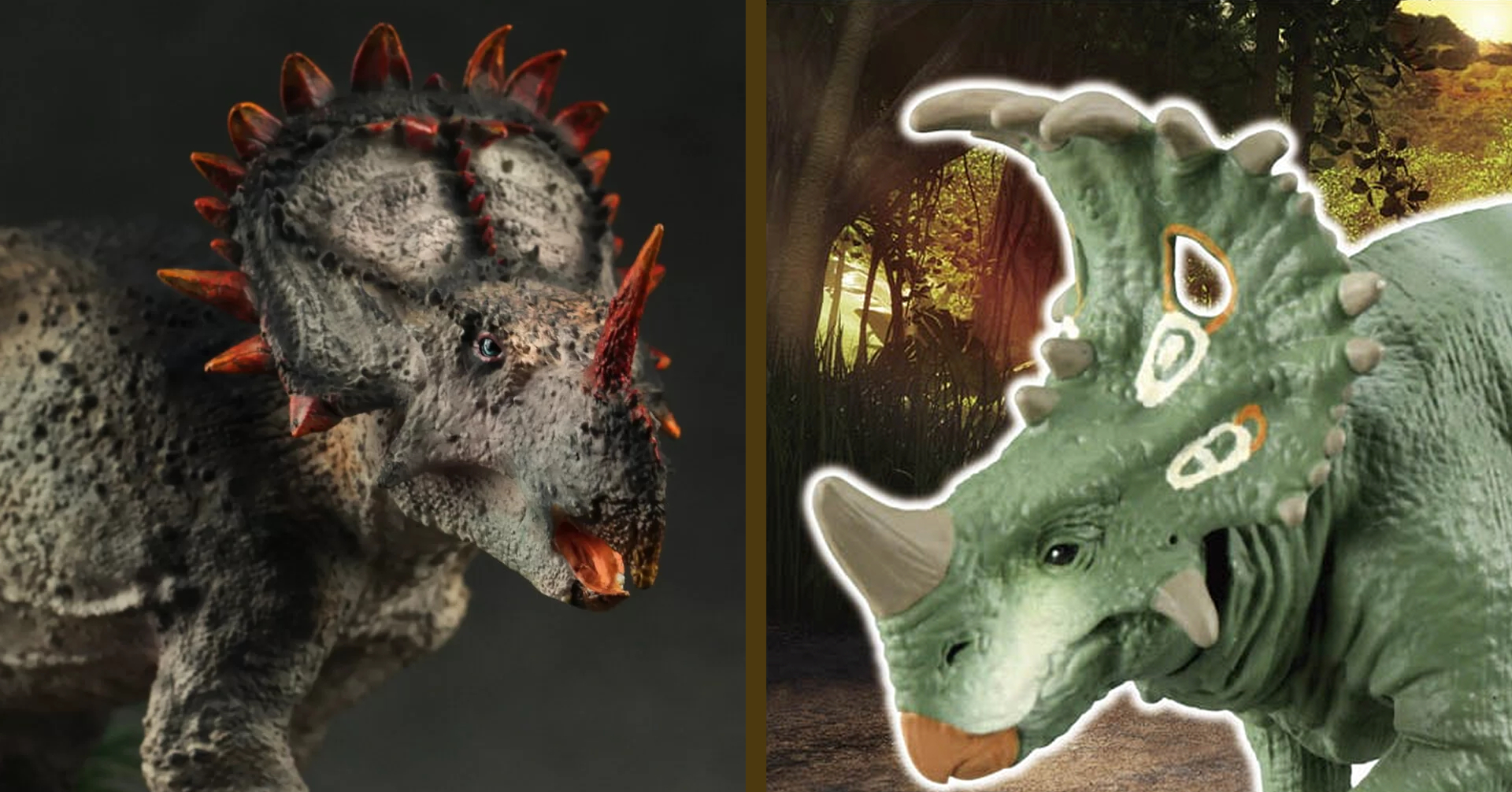 Sinoceratops is a centrosaurine ceratopsid that received some attention when discovered due to the fact of being the first ceratopsid found outside North America. The fact that it was unearthed in the same formation of the tyrannosaurid Zhuchengtyrannus offered the possibility to make sets with these two animals.

First came the Takara Tomy model, inspired by an illustration by the Chinese paleoartist Zhao Chuang and created in occasion of the DINO Kingdom Expo 2012 at the Makuhari Messe Center in Chiba (Japan).

The second ever model realized is japanese too: the Favorite is part of a set made for the Fukui Prefectural Museum in 2016. Note the keratin that from the beak goes up to the base of the nasal horn. Both the Favorite and the Takara Tomy are paired with a Zhuchengtyrannus model.

The first “stand alone” Sinoceratops is the resin statue unveiled by Vitae in 2018. It’s one of the first Vitae models, accompanied by a magnificent base, and probably part of an experimenting search of a market niche.

What happened then? Well, in 2018 it was released the film “Jurassic World: Fallen Kingdom“, which included in its cast Sinoceratops, or at least a creature with this name… In fact, some perplexity surrounds the inclusion of this animal, especially since many clues points that the ceratopsid due to appear in the film had initially to be Pachyrhinosaurus, “transformed into Sinoceratops” practically last minute. The reasons behind this choice are not clear: it could have been an attempt by Universal to please the Chinese fans, or even a way to appraise the reactions of those who, at the first trailer, can’t think of it as Pachyrhinosaurus. The turning point was the inclusion of a nasal horn, the presence of which had been hypothesized in the past for Pachyrhinosaurus but of which most paleontologists today doubt. This horn was tought to be composed of keratin, in opposition with the Sinoceratops hone (which had a bony core too) and in analogy with that of modern rhinos, which are protagonists of a commercial spot against poaching along with “Sinoceratops” and Bryce Dallas Howard (Claire Dearing in the film).

Supporting the idea that the movie Ceratopsidae was meant to be Pachyrhinosaurus are both anatomical details and clues in the marketing. For example, Sinoceratops did not have the horns in the center of the bone frill that are shown in the film, but they are a feature of Pachyrhinosaurus (the P.lakustai species, to be exact), and the apparently inexplicable openings in the shield are suddently clear if you assume that the concept artist responsible of the Pachyrhinosaurus/Sinoceratops used as a reference images of Pachy, the main character of Walking With Dinosaurus 3D, ignoring that they’re not not a trait of the animal but a wound inflicted by a troodontid in the first minutes of said film.

The evidences coming from the marketing are even more striking: for the first series of “Roarivores” (2018) Mattel (who took over from Hasbro the market of Jurassic World toys) presents a model labeled “Sinoceratops”… but which is clearly a Pachyrhinosaurus!

The same mistake is repeated with a miniature also produced by Mattel in 2019: again a Pachyrhinosaurus called Sinoceratops. One would think that Mattel had sculpted a Pachyrhinosaurus precisely because it was provided by Universal of the info that it would have been featured in the film, and then, when the species was changed, it was forced to call it Sinoceratops to ensure that there was one in the toy line.

Be it Pachyrhinosaurus or Sinoceratops, undoubtedly Jurassic World: Fallen Kingdom projected this animal, previously unknown to most, into the most famous dinosaurs. Several brands eyed the opportunity and produced their own Sinoceratops: Nanmu, in 2019, proposed a model that – although unlicensed – is clearly a carbon copy of the film’s animal (also available in a reddish colouration and as a larger bust). Thanks to Mattel’s production delay, Nanmu’s was the first ever filmic Sinoceratops (and with a strong sense of life-like, too), a featwhich contributed to its success.

And then Eikoh, also in 2019, which also copied the design of the film but smartly removed the holes in the frill.

After the fans’ requests and coincidently with the release of the Netflix TV series Camp Cretaceus, in which Sinoceratops plays a much greater role than in Fallen Kingdom, Mattel updated its Sinoceratops, finally proposing an accurate version to the movie creature. It was available first with a slightly different coloring from that of the film (some saw a resemblance to the Jungle Skin of Jurassic World: Evolution), and then with a more faithful repaint.

In 2020, the film Doraemon: Nobita’s New Dinosaur showcased a Sinoceratops clearly based on that of Jurassic World (note the horns in the middle of the frill and the openings), and here is the reproduction by Takara Tomy.

As well as a second Sinoceratops, this one as official licensed Jurassic World toy. Note that both feature an articulated tail, trademark of the Takara Tomy articulated dinosaurs.

Licensed by Universal is also the Sinoceratops by ToyMonster for the Captivz Slime Eggs line, surprise eggs containing jelly and a model that needs to be assembled (somehow like Kinder surprises). It’s a quite nice movie Sinoceratops, considering its nature.

The Chinese company PNSO announced the coming of a more accurate Sinoceratops with a newborn version, named A-Qi. We do not know Sinoceratops chicks and the reconstruction seems to be based on other centrosaurines, even if perhaps the distinctive features of the frill have been emphasized to make it recognizable.

It was immediately followed by an adult version, also called A-Qi. The most attentive will notice that, although anatomically correct, both the chick and the adult sport liveries that resemble the ones of the film.

Meanwhile, the popularity of the Universal Sinoceratops, thanks to Camp Cretaceous too, didn’t diminish, to the point that we can still find it as a surprise in Kinder Joy.

It can be noted, too, that a bust of Sinoceratops (obviously, the movie creature) appeared in Camp Cretaceous, and that Sinoceratops is exactly the animal chosen by PNSO (along with the ubiquitous Tyrannosaurus) for their new line of bronze busts.

Speaking of accurate Sinoceratops, it’s on the way the one which is part of the Beasts of the Mesozoic Wave 3 Ceratopsids, by the acclaimed sculptor David Silva. It features parts sculpted by Simon Panek and its coloring is based on the modern Chinese crocodile lizard (Shinisaurus crocodilurus).