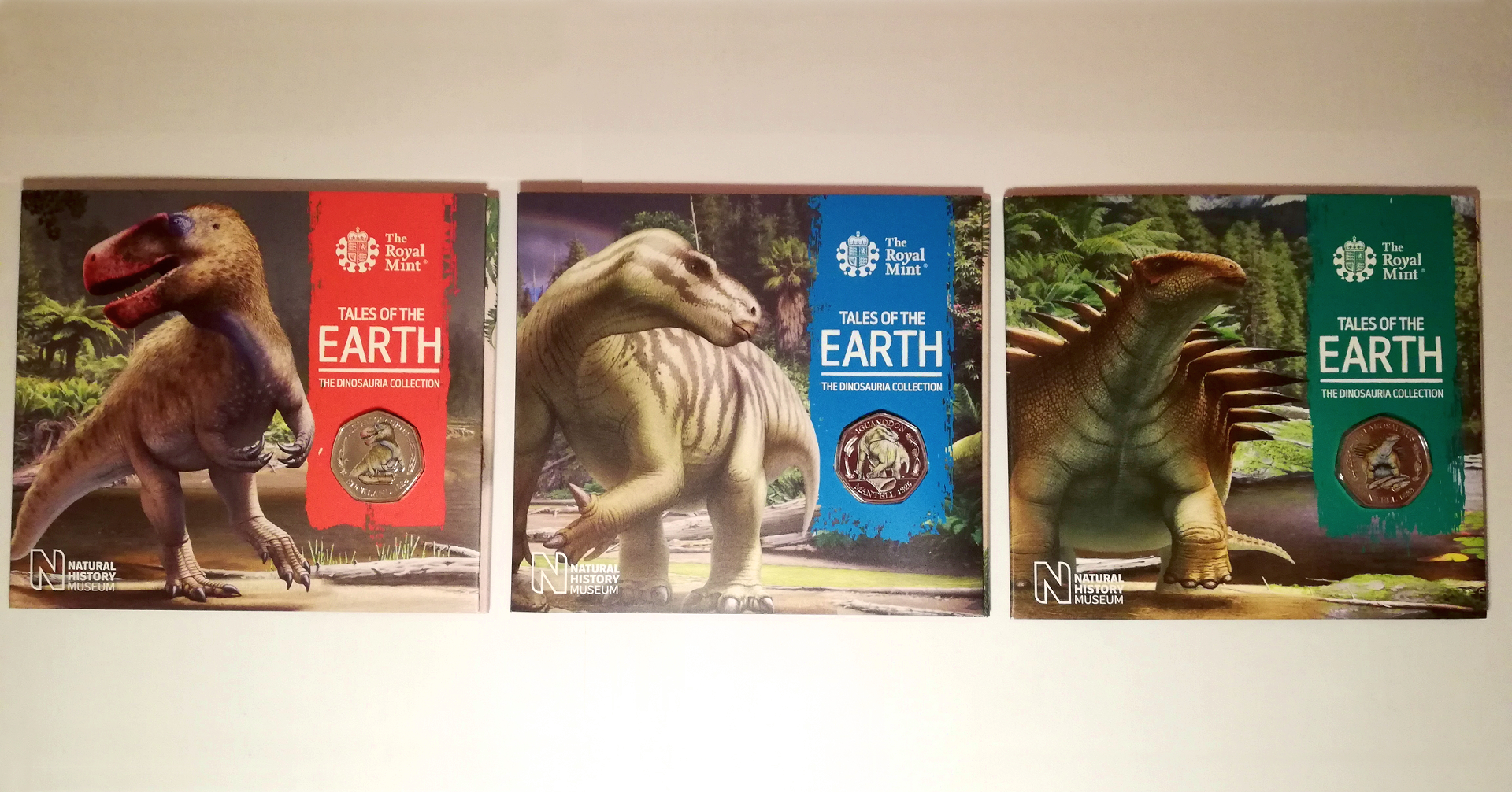 The word dinosaur was created by Richard Owen in 1841, and the science which studies these and other long-extinct animals, paleontology, is one of the most recent scientific disciplines to have been established. Today, our knowledge about the world of dinosaurs and ancient life has made significant progress thanks to the countless discoveries made around the world over the decades, and the place where the interest in these great reptiles of the past began in England, the country where the first three dinosaurs were officially described. In 2020, to commemorate the discovery of these three dinosaurs who opened the doors of a world previously unknown to us, the English Mint (The Royal Mint), in collaboration with the Natural History Museum of London, decided to make three special coins which are part of “The Dinosauria Collection”, each representing these three dinosaurs. The drawings were made by the English paleoartist Robert Nicholls, a guarantee in the field of paleoart, and were made according to the most recent knowledge about these animals.

The first dinosaur to be officially described was Megalosaurus, whose name means “great lizard”. This carnivorous dinosaur lived in the Upper Jurassic, about 150 million years ago, and was described in 1824. Although it is known from relatively few remains, the most recent estimates suggest an animal of about 6 meters in lenght. To get an idea of ​​how it looked in life, think of something smaller but similar to its relative Torvosaurus, since they were both Megalosaurid. It was very interesting to see Bob Nicholls’ choice to put feathers on Megalosaurus, something that is rarely done with Megalosauroid theropods. Lets hope that in the future new discoveries will be able to give an answer on what for now is only a rather plausible speculation.

The second dinosaur that was described is without a doubt the most famous of the three, Iguanodon. Described in 1825, this large Ornithopod is mostly known for its famous sharp “thumb”, used as a defense against predators and maybe even in intraspecific fights. Another thing that made this dinosaur iconic is the way it changed over the centuries. With the knowledge of the time, its initial depiction was similar to that of a lizard with a horn on its snout, which will turn out to be the sharp thumb. Thanks to the incredible discovery of about 30 skeletons, which took place in a Belgian mine in 1878, its appearance became similar to a bipedal lizard. The design of those old reconstructions was then used to create Godzilla, a 1954 movie that I don’t think needs any introduction. With the discoveries made in recent decades, we now know that this dinosaur was quadrupedal, but it is also thought it could occasionally stand on its legs.

The last dinosaur is the least known of the three, the armored Hylaeosaurus. Described in 1832, this herbivore is known from very few remains, but over time it has been possible to understand its taxonomy. Hylaeosaurus was probably around 5 meters long, and it was an Ornithischian like Iguanodon, but instead of being an Ornithopod, it was an Ankylosaur, more precisely a Nodosaurid. To clarify these terms, the Nodosaurids are ankyloaurs which often possessed spines and plates on their body as protection but did not possess the famous tail club of its relatives. To make few examples, Hylaeosaurus was more related to dinosaurs like Edmontonia and Borealopelta than instead of the famous Ankylosaurus.