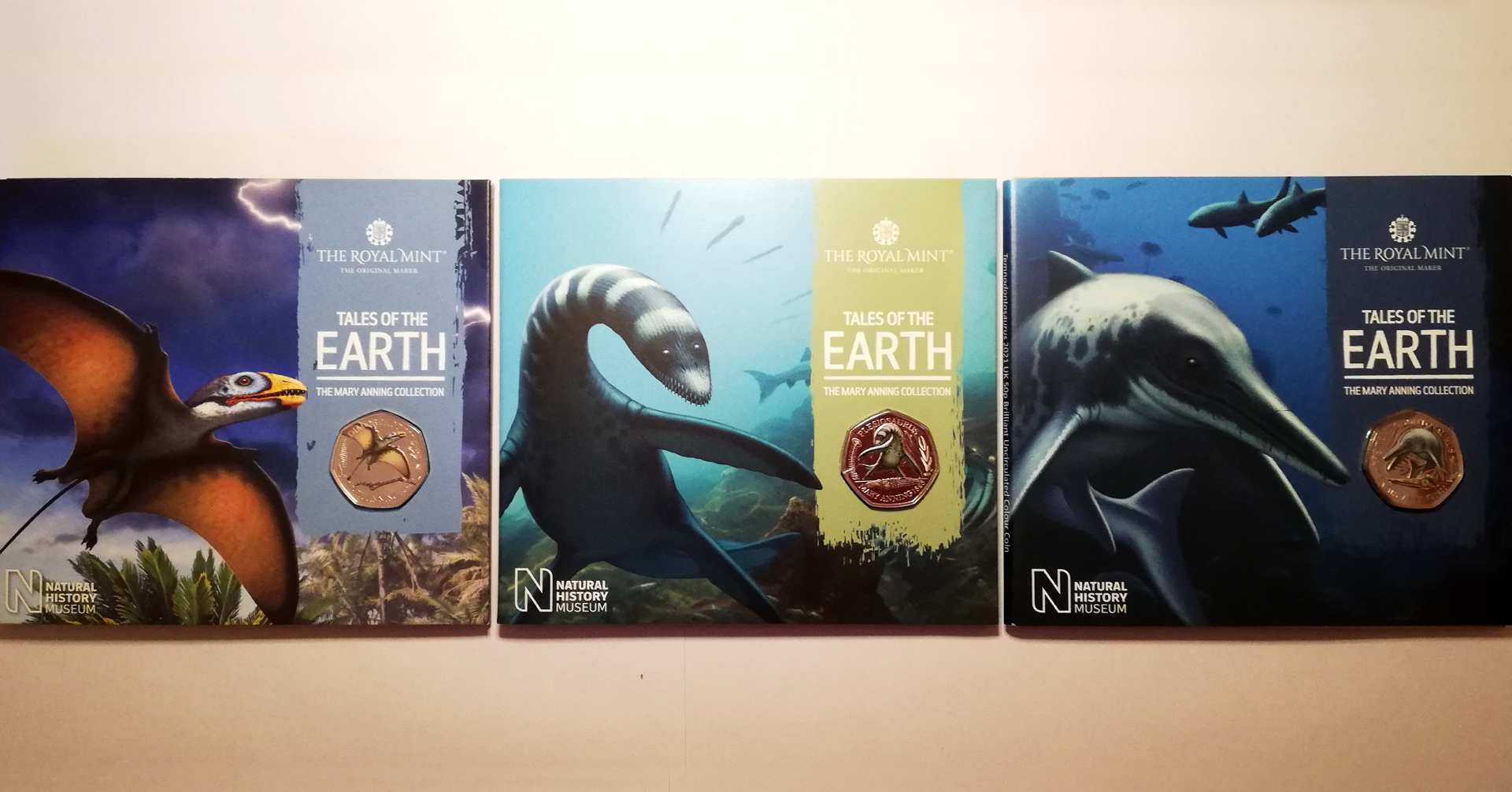 In a previous article, we talked about the first three dinosaurs ever described, and how the English Mint decided to produce three themed coins about them.

Thankfully, when it comes to paleontology, the UK is also famous for other reptiles discovered long ago, and some of these were found by a woman named Mary Anning. Unfortunately, her story is similar to that of many characters who became famous and important only after their death. When she was alive, the merit of her important discoveries was never recognized, especially the fact that she was a woman at a time when society was very macho.

Although she may never know, today she’s considered one of the most important paleontologists ever, as she was the first to discover some of the most famous and important Mesozoic reptiles ever.

To commemorate Mary Anning, the English Mint has decided to dedicate her “Tales Of The Earth: The Mary Anning Collection”: three themed coins, each depicting a prehistoric animal discovered by her, two marine reptiles, and a flying reptile. As with the coins dedicated to the first three dinosaurs, the packaging is identical and within the pages, you can find the same type of information, and the drawings have always been made by the paleoartist Robert Nicholls. The coins contain the same details and information as the previous three: the drawing of the animal and the holotype, the surname of the person who described them, and the respective year. In each of the coins dedicated to the first 3 dinosaurs, two prehistoric plants living with their respective animals were drawn. Since this time the coins are dedicated to two sea animals and one flying animal, corals were drawn instead of plants.

Let’s start with Dimorphodon, one of the first pterosaurs to be discovered, which a few years ago received a surge in popularity following its introduction into the Jurassic World franchise. Its fossils were first discovered in 1828, and the following year they were described by paleontologist William Buckland as another species of Pterodactylus, given that at the time it was the only other known pterosaur. In 1858 thanks to new specimens provided with skulls, Richard Owen redescribed the remains and assigned them to the new genus Dimorphodon, whose name means tooth of two dimensions. This pterosaur lived in the Lower Jurassic (195 – 190 million years ago) and had a length of about one meter and a wingspan of about 1.45 meters. Being a rather basal genus, it had a long tail and relatively short wings, which according to the most recent studies did not make it an agile flyer. Given his poor flying ability, he probably spent a lot of time on the ground, feeding mainly on small vertebrates.

And now let’s move on to the first of the two marine reptiles, starting with Plesiosaurus dolichodeirus, the species that later gave the name to the whole family, and which are probably the most famous and well-known marine reptiles even among the general public, especially for the fact that the appearance of Plesiosaurus has been compared to that of the elusive Loch Ness monster. The first remains of Plesiosaurus were discovered in 1821, but in 1823 Mary Anning found a complete skeleton, and the following year, based on her discovery, the species was officially described. This marine reptile lived in the Lower Jurassic, between 199 and 175 million years ago. Thanks to the complete skeleton of 1823 we know that Plesiosaurus was about 3.5 meters long, and like many of its relatives it had a short tail, four large fins, a long neck and a small head with many pointed teeth suitable for capturing mainly molluscs and fish.

The last of the three reptiles is one of the largest and most famous ichthyosaurs known, Temnodontosaurus platyodon. His remains were discovered in 1811 by Mary Anning’s brother Joseph. The following year, Mary found the rest of the skeleton which, however, was later lost. Temnodontosaurus was the first ichthyosaur to be described, but until 1889 it was part of the genus Ichthyosaurus. Its taxonomy is very complicated, in fact, depending on the sources, not all known species are considered valid. Temnodontosaurus lived in the Lower Jurassic and depending on the species, its remains have been found in various European countries and in Chile. This ichthyosaur was the largest predator in its environment and mainly fed on other marine reptiles. With an estimated length of between 9 and 12 meters, Temnodontosaurus is also one of the largest ichthyosaurs that ever existed, surpassed only by a few Triassic ichthyosaurs.

As with the other coins, these are also a must-have for every paleo-nerd, and it’s always nice to see the various ways in which the figure of Mary Anning is honored for the great contribution she has been able to make.