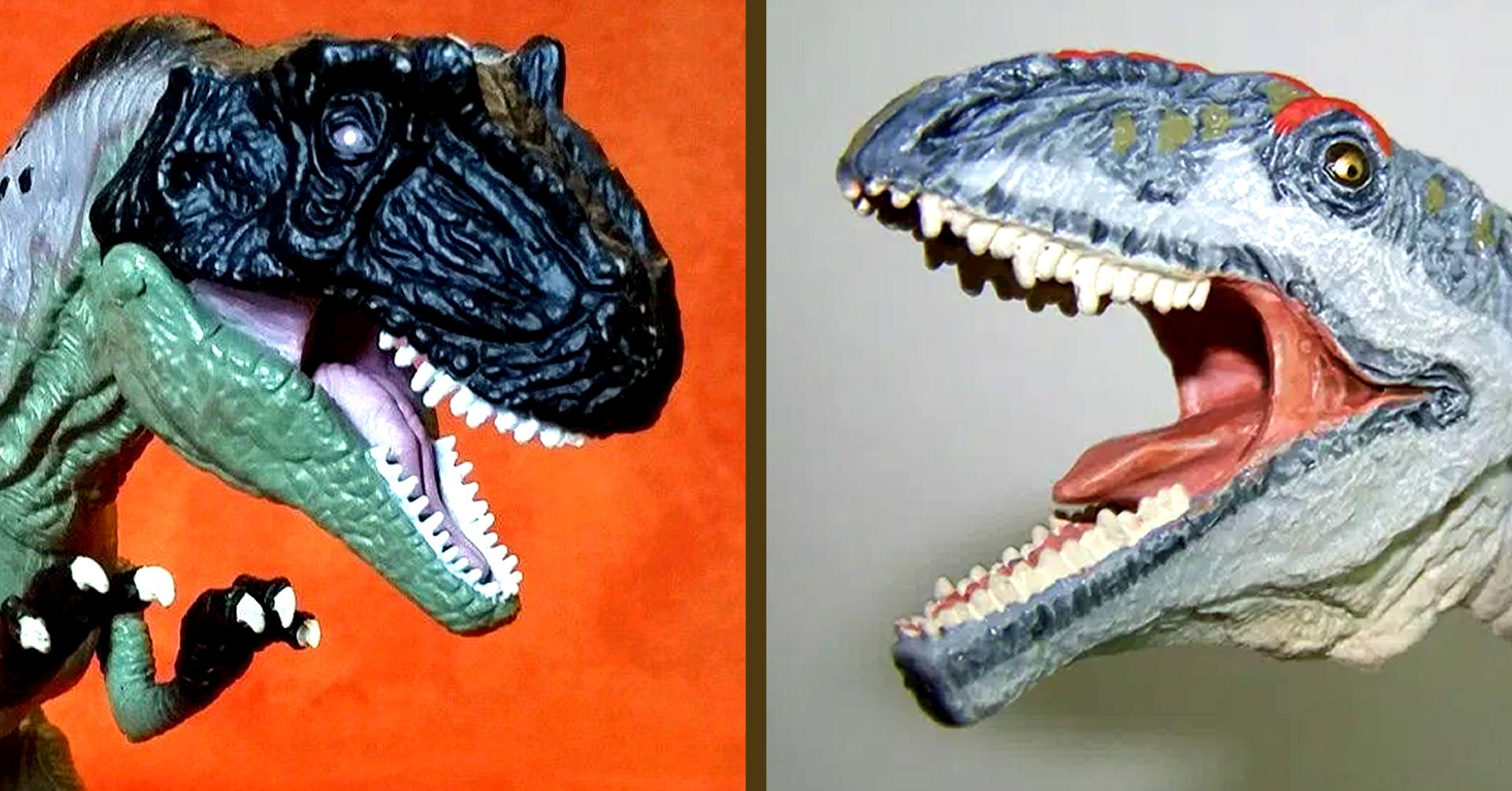 A few days ago the news, released by actor Sam Neil in an interview, that among the new dinosaurs that will appear in Jurassic World: Dominion there will also be the Giganotosaurus, the great South American theropod whose dimensions rivaled those of the Tyrannosaurus rex and that, largely for this reason, has a large group of enthusiasts who were waiting for this moment.
Although it has appeared in comics and video games in the JP universe, no line affiliated with Universal has so far made a toy of it.
With the awareness that Mattel will remedy this lack, we want to take advantage of it to retrace the different reproductions of this animal. There are more than you can imagine, so we will divide it into three parts.

By heart, Giganotosaurus’ very first toy is an articulated figure made between ’97 and ’98 by Resaurus. The general aesthetic is precisely the daughter of the 90s (it is no coincidence that Tyrannosaurus rex and Velociraptor of the same line are very similar to the versions of JP) and the joints, especially in the hind legs, are not excellent, to the point that it is it is necessary to place it on a base to give it stability. A rather particular design choice is that of the head, with a shorter muzzle than the image that everyone had at the time of the animal: by a bizarre coincidence, it reflects a little more the knowledge we have on the shape of the head.

Apparently, in 2005 COG Ltd. made miniatures of T. rex and Giganotosaurus, but exchanged their names!

Manufactured by Safari Ltd. in 2008 for the official line of the Natural History Museum in London, this model was the first on which particular attention was paid to scientific accuracy. Sculptor Forest Rogers made him lean but muscular and the head is a little gem, especially for the weather. The pose, which later became a trademark of Carnegie theropods, allows for some stability and, speaking of coloring, golden eyes are another trademark that works great.

We make a small parenthesis to point out the use of the color scheme of the Giganotosaurus Carnegie for a line of soft toys and puppets (not exactly beautiful) of different sizes, made by Hansa.

In 2010 Schleich introduced his own version of the Giganotosaurus, whose strong point was not the accuracy, but rather the size.

This Design was re-proposed in various forms, including a smaller version with articulated jaw, a Resculpt even less accurate if possible, some Minis and a keychain!

The one exception is the juvenile version of 2019, surprisingly accurate by Schleich Standards and certainly more pleasing than the repainted abomination.

Perhaps not everyone knows that Schleich could also be behind a Giganotosaurus made for the Ravensburger interactive toy series: by placing a special electronic pen on an orange sensor placed on the side of the toy, you can hear information about the animal itself. While this Giganotosaurus doesn’t shine for accuracy at least it comes closer: although the head is both shrink-wrapped and thick and the feet are oversized as a child’s toy it works well, it is recognizable as Giganotosaurus and it has character.

One show that has helped many children to learn about various dinosaur species is Dinosaur Train, whose success has led to the creation of a vast line of toys. Among these appears Laura, female Giganotosaurus and fixed presence of the famous train. It is a pity that the shape of the head does not reflect what is seen in the Show, the result is a generic theropod rather than a beautiful Design by Giganotosaurus.

Japan does not miss its personal toys, often more difficult for collectors to recover: a Capsule Toy made by Kaiyodo for the Yujin Kaiyodo Dinotales line, in all honesty too inaccurate for the Kaiyodo Standards, and a Happinet Soft Doll for the Great Dinosaur Era line, toy but captivating.

End of Part 1 … see you again in the second part!