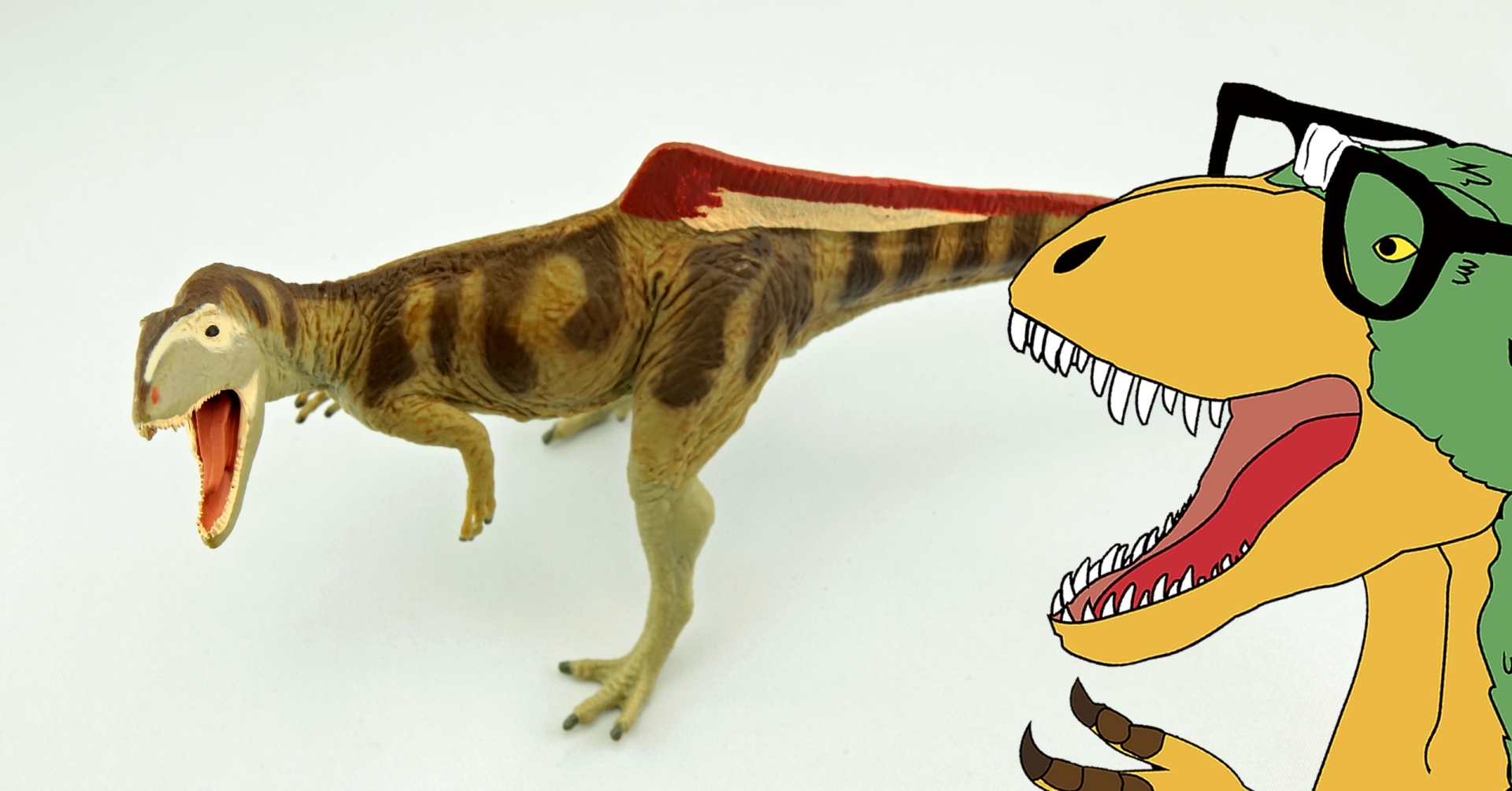 Another look at a figure from the past, to remember exciting chapters in the history of Paleo-Collectibles!
Leyster Guest Review, photo by RobinGoodfellow

Concavenator corcovatus (Ortega et al., 2010) is a carcharodontosauridaae from the Barremiano (Lower Cretaceous) of Spain. It is known for a single almost complete skeleton that also has associated integument imprints. This animal is famous mainly for the presence of elongated neural spines in front of the sacral region and presumed ulnar papillae in the forelimb. It was the smallest carcharodontosauridae described before Lasjavenator’s discovery.

As can be read in the mold, the PVC sculpture from the Carnegie Collection (work by Forest Rogers) was released in 2013 – just three years after publication – and represents the latest model in this series to feature a new genre rather than a remake. of a species already realized.

The Carnegie Concavenator is 25cm long and is advertised at a scale of 1.25, which is almost correct – it’s a little too big and would be more accurate 1.23. The animal is in an almost neutral pose, except for the tip of the tail and the head. The head is turned to the left and up and the jaws are open. The hind legs are slightly apart and this, added to the tip of the tail bent to touch the ground, allows the model to be stable and to keep the back almost horizontal. A detailed study of Concavenator was only carried out in 2018 (Cuesta Fidalgo, 2018), so Rogers found herself working exclusively with the help of the original publication and the few skeletals that had been made at the time – all more or less incorrect. in one particular or another. However, the result is still satisfactory today when compared with skeletals produced after the new study (such as that of randomdinos), with only the neck and hind limbs that could be more elongated.
The base plastic is light gray, the body is sienna with wide vertical stripes in burnt sienna, which seems to have also been used as a wash to highlight the details. The sail on the back is blood red on the outside and creamy yellow on the inside. The same creamy yellow was used for the teeth and the rictus and probably – diluted – for the light band that traces the crown of the head. The inside of the mouth and nostrils are dark pink (unfortunately uniform and unwashed), the claws are dark gray and the eyes – contrary to many models in the Carnegie Collection – are completely black. Pose and colors are reminiscent of the life-size statue – nicknamed “Pepito” – temporarily on display in the city of Cuenca, near the site of the discovery, but this is probably just a coincidence, given that the statue was inaugurated in March 2015.

Despite the burnt sienna wash, the details appear less evident at a superficial glance than a Carnegie of only a couple of years earlier, such as Cryolophosaurus. Perhaps persisting with washing would not hurt. However, upon closer inspection, the sculpture shows the usual attention to detail combined with a “Paulian” elegance that is found in the latest Forest Rogers sculptures for the Safari. The scales are not individually sculpted, but at such a scale the effect would have appeared rather grotesque, given the millimeter size of the Tetanurae scales we possess; personally I am not a fan of insisting on details to make the sculpture appear more precious: after all we are talking about an animal that was five meters long in life and, as you would not notice certain elements in a tiger or zebra model in that scale, so they shouldn’t realistically show up in Concavenator.

The skull resembles that of the other Carcharodontosauridae and, thanks to its completeness, it is reported quite faithfully: the animal presented a bony outline behind the orbit that could have been highlighted more, either with the sculpture or with a washing. The teeth finish appropriately before the orbit and are not individually sculpted (they probably would have been too brittle) but the shadows between one tooth and the other and the variation in length of the same still offer a nice appearance.
If we examine the forelimb we can see how, although the fingers are tiny and thin, they correctly reproduce the formula of the phalanges of this animal: two in the first finger, three in the second, four in the third (remember that the claw is a phalanx ). Unfortunately, the right and left front legs have the third toe shorter than the first and first and third toes of equal length, respectively, when the third toe should be longer than the first. Also missing – perhaps – something: the ulnar papillae I mentioned earlier are present on the wing of current birds to provide anchoring to particularly robust and resistant feathers (not surprisingly, not all birds have them), instead this Concavenator shows smooth limbs like those of any other Carnegie carnosaurus. Several reasons can be hypothesized for this omission: at the time of publication the identity of the ulnar papillae had been contested (even if the most recent publication on this animal countered the criticism) or, more simply, Safari feared that proved too fragile to be depicted in the model. Too bad, however, because in this way Concavenator loses one of its distinctive features.

Extremely appreciable is also the fact that the pubic foot (that protrusion which in many reconstructions protrudes from the abdomen of dinosaurs) here is correctly hidden in the tissues of the body, as it should be: Scipionyx, with its preserved organs, undoubtedly shows its role in supporting and supporting the intestine. Going down the hind limb, we notice that on the three toes – perhaps even on the first one, but the detail is really minute – there are scutes similar to those we observe on the legs of today’s birds, and it is correct, because footprints that show the presence were found in Concavenator. However, one downside is the flat soles of the feet: the footprints themselves show fleshy pads under the toes that kept the claws – at least their base – off the ground. Unfortunately, representing the legs in this way is a distinctive feature of Forest Rogers’ sculpture.
The underside of the Concavenator’s entire tail – up to the final third, where detail is lost – is wrapped in flat scales, similar to those found on the abdomen of today’s snakes and crocodiles: this is also a feature observed in footprints. of leather accompanying Concavenator.

If the ulnar papillae are absent, the other characteristic of this animal is very evident, highlighted by the blood red and creamy yellow: I am talking about the crest placed immediately in front and above the pelvis. Concavenator was immediately known as “the dinosaur with two sails”, but the skeleton of this animal shows really high neural spines only before the sacral vertebrae, while after the pelvis there is an elevation, but – taking into account the soft tissues – it could very well have been invisible in life. Forest Rogers bypassed the problem by giving his Concavenator a crest that continues from just before the pelvis to about a third of the tail, effectively engulfing both places where the neural spines are elongated. While this requires some degree of speculation, a similar structure is not unlikely – few current animals follow the outline of their skeleton closely and closely.
Coming to the downsides, the Concavenator Carnegie, like many Rogers sculptures, is excessively shrinkwrapped by current standards, a term which means that – in fact – it excessively follows the profile of the skeleton. In particular this is evident in the proximal region of the hind limb (the “thigh”) and in the base of the tail, which should be more robust to house the caudofemoral muscle that was essential for the dinosaur’s movement.