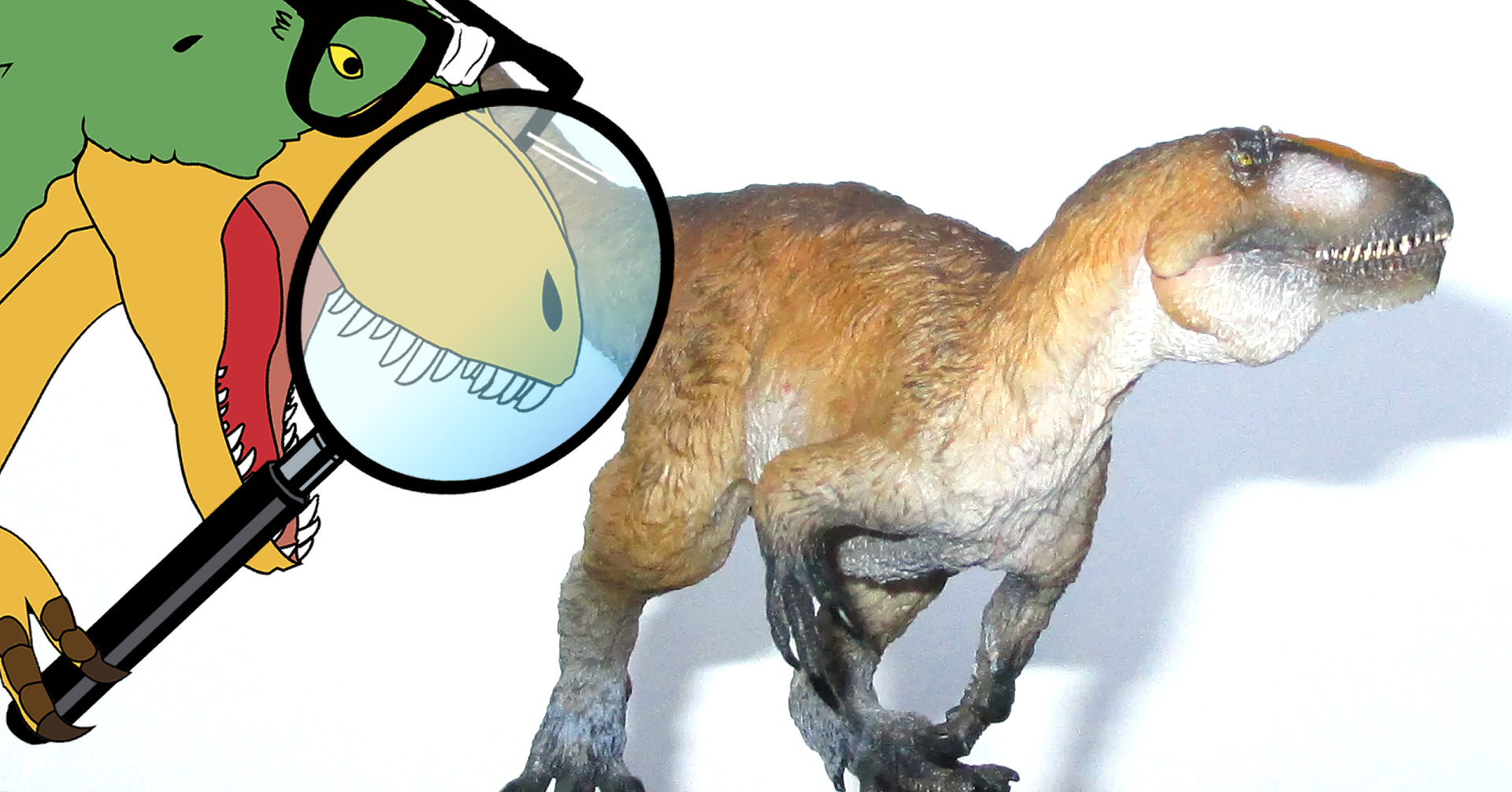 Although ten years have passed, I remember all too well the uproar caused by the discovery of Yutyrannus. This theropod shifted the maximum record of tonnage in a feathered dinosaur from 50 kilos in Beipiaosaurus up to one and a half tons, effectively increasing it by thirty times. To be exact, Yutyrannus is the largest animal known to preserve direct evidence of plumage, larger than even the most massive extinct birds. With such a discovery, it didn’t take much to get models inspired by Yutyrannus: the small Kaiyodo, with its interesting coloration; the Favorite, which reproduces the montage at the Dino Kingdom Expo 2012 (Chiba, Japan) of two Yutyrannus fighting; the Safari Ltd., fantastic albeit with some flaws; and finally the Rebor, which instead was full of defects. Then other fossils were discovered and no more Yutyrannus models were seen. Until 2021, that is, in which two have been announced: the Beast of the Mesozoic (remember that the Kickstarter will start in September) and this PNSO.

Yutyrannus is by far the largest proceratosauridae with adequately complete remains. Three specimens have been described: ZCDM V5000, the biggest one, and then ZCDM V5001 and ELDM V1001, which weighted about one third. Unlike the other two, ZCDM V5000 is considered adult – based on the degree of fusion of the vertebral elements – and this allowed us to study the ontogenesis of this animal. In particular, the skull becomes deeper and more robust, while the forelimbs grew proportionally shorter. With these details in mind and comparing the PNSO model to a ZCDM V5000, ZCDM V5001 and ELDM V1001 skeletal by GetAwayTrike, I believe the sculptor intends to represent ZCDM V5000, the largest specimen. Based on the length of the skull, the model is in scale 1:32, but – for reasons I’ll explain better when talking about proportions – this measurement might not be correct.

When presented this model, I have heard more than one person comment that Yutyrannus superficially resembles an Allosauridae. This because we are used to think of the late Cretaceous Tyrannosauridae, with their robust head, hind limbs suited for running (except in the most massive forms) and, above all, the reduced forelimb, continuous object of mockery. In truth, these are specializations acquired “last minute” by the Tyrannosauroidea clade, which for much of its history (the first fossil records are from the middle Jurassic) was represented by animals with no reduced the forelimbs! Fossils show that Yutyrannus, despite being much larger than other proceratosaurids, possessed strong arms ending in three fingers, armed with large sickle-shaped claws. In the PNSO model they are clenched under the body and thus not particularly visible in side view, but just look at the model from the front and it’s another matter entirely.

Even the skull of Yutyrannus, with its lacrimal crests, has a superficial resemblance to that of an Allosauroidae and some have suggested a relationship with Concavenator, with whom Yutyrannus shares some characteristics. However, phylogenetic analyses have shown that they’re evolutionary convergences. Smaller proceratosauridae (eg. Guanlong) show delicate crests on their skulls, formed by the nasal bones; instead, Yutyrannus has a thick, low ridge with low bosses that give it a vaguely wavy appearance. In the PNSO model these protrusions are almost obliterated by a keratinous covering (which, as is traditional for PNSO, is highlighted by a glossy varnish), however it would not have been bad to insist more with the keratin, as seen in other reconstructions: due to the size of the model, it’s a detail easy to overlook, and the same goes for the lacrimal crests, represented as two barely hinted horns – perhaps also fearing that they would have been too delicate – when others have made them real horns; unfortunately it seems that the PNSO Yutyrannus falls into the category of conservative keratin models, such as their Allosaurus; the absurdity is that the crests appear too small even when compared with a skeletal (therefore without taking keratin into account). Moving further down the muzzle, we notice how the model is devoid of lips: their presence in theropods is still a controversial issue. The skull illustrated in the paper (that of ELDM V1001) has eleven maxillary teeth; in the PNSO model there would seem to be only nine, but (in addition to the possibility of me counting wrong, given their size) it must be taken into account that among the theropods there is a certain variability in tooth count, and even asymmetries between right and left side. The inside of the mouth, which is brushed with glossy varnish, shows the choanas we have now come to expect in the PNSO theropods. However, the jaw joint, perhaps for technical reasons, is positioned excessively downwards, the musculature in the corners of the mouth looks worse than that of other PNSO models and it would not have been bad to add another half centimeter of tongue in the depth of the troath. For these reasons I believe that the PNSO Yutyrannus is at its best with its mouth closed, however these are minutiae (the skull is really small) that others may not find annoying.

Fossils found in the famous Lower Cretaceous strata of the Liaoning provence often preserve remains of skin, feathers and other extraordinary details, but at a price: due to how animals fossilized, the fossils are compressed laterally, as if a steamroller ran over them. For this reason, we cannot know if the width that PNSO attributed to Yutyrannus’ skull, which allows some degree of binocular vision – even if not at the level of Tyrannosauridae – is correct. Moving along the neck, we find what in my opinion represents one of the few real defects of this model: the musculature of the nape looks rather underdeveloped. It is a detail that many will miss and that just as many will not care, I admit this without problems, but it’s a shame, especially considering that, hanks to the additional volume of the feathers, the rest of the body appears adequately robust. Regarding the proportions, Yutyrannus has a rather large skull, approximately as long as the femur, and I have the impression that of the PNSO model is undersized.

Since we mentioned it, now we’ll talk about the most interesting feature of Yutyrannus: the plumage. First of all, it must be specified that its are not complex feathers such as those of current birds or other theropods, but of simple filaments, superficially similar to hair. Xu et al. do not deny that the plumage might have been restricted only to some areas of the body (a consevrative approach which schience should always follow), but fortunately the PNSO sculptor (unlike the REBOR one …) fully covered the Yutyrannus with feathers: the only areas devoid of them are the tip of the muzzle, the fingers and the toes. The feathers are sculpted with enormous attention: you can see how they are gathered in strands that fall naturally along the body of the animal, forming a thick cover like that shown by Anchiornis and which could represent the basal condition compared to that shown by modern birds. The feathers alter the profile of Yutyrannus, making it appear more robust, despite being relatively close to the body – except on the tip of the tail, where they form a tuft, and on the chin, where there is a sort of Chinese dragon beard. But the feathers are not all of the same lenght: they are shorter on the muzzle and approaching the extremities of the limbs. There lies what is pheraphs the only error in the feathering, since Xu et al. mention that the filaments on the forelimb measure at least 16 cm (and in ELDM V1001, the smallest specimen) against 15 in the tail of the ZCDM V5000. In feather-free areas, there are small scales and – on the back of hands and feet – scutes similar to those found on the legs of present-day birds. We have correlates for their presence on the hind limbs, but this feature on the forelimbs remains purely speculative.

As in all the recentmost PNSO models, Yutyrannus is accompanied by a plastic support – which I fear will be unavoidable to prevent the already low forelimbs from touching the ground, cosplaying the Papo Acrocanthosaurus – and by a folded artwork, which in this case reproduces an illustration by Zhao Chuang dating back to a few years ago and already appeared in other publications.

Surely the PNSO Yutyrannus is an impressive model. Unfortunately, between the shape of the head that does not match the skull and the other small flaws that I noticed, I feel a hint of regret thinking how little it would have taken to achieve perfection – or at least, what can be called perfection on the basis of current knowledge. With the knowledge that Safari Ltd. would be more appropriate for those looking for accuracy at the moment, PNSO’s lifelike feeling is always appreciable, especially in a feathered dinosaur.