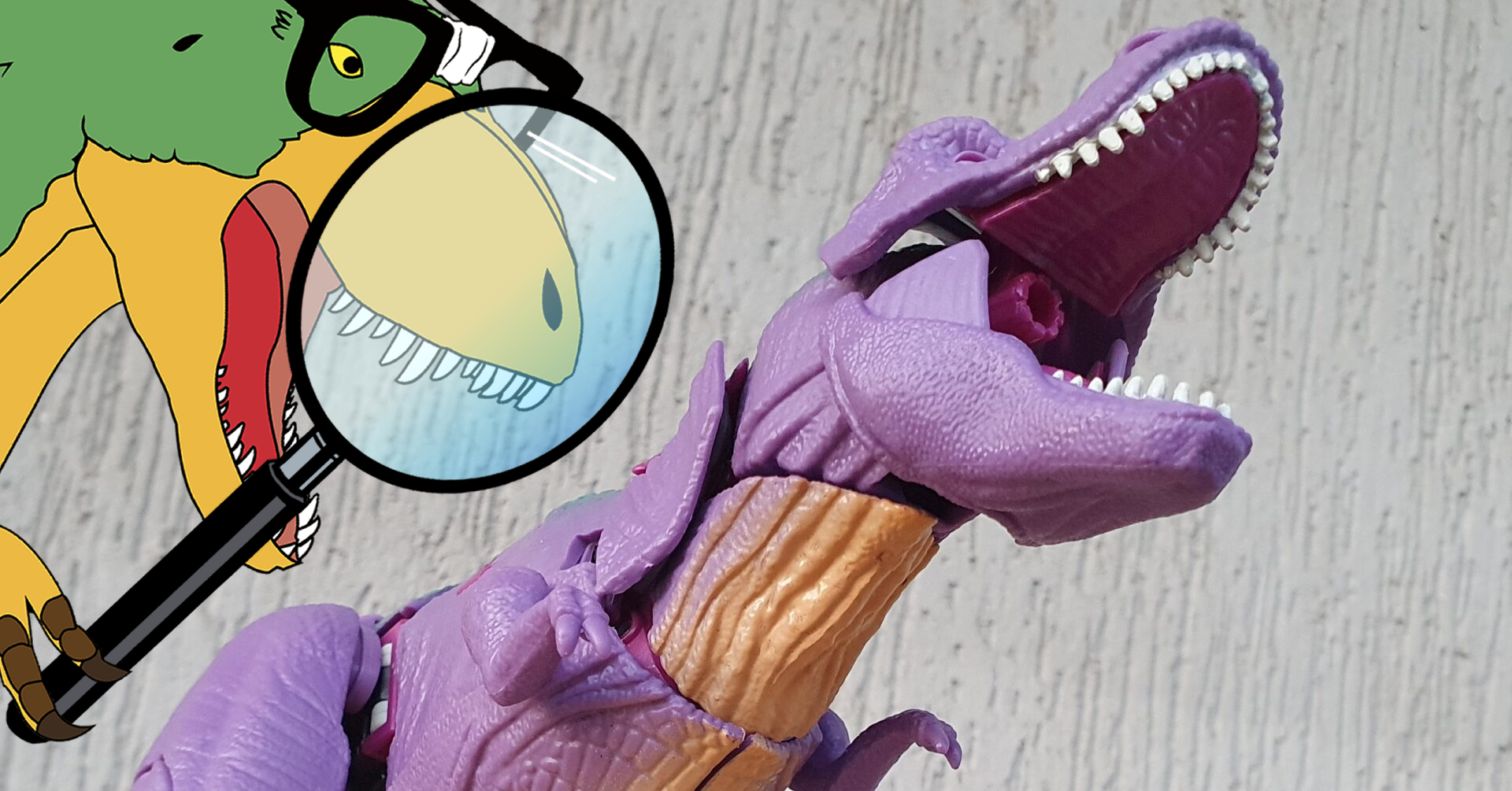 The release of Beast Wars: Transformers in 1996 was something of an innovation for the famous series of toylines and tie-in animated series – for the robots’ alternate modes were not vehicles or weapons, but rather animals. Instead of Autobots against Decepticons, it had Maximals against Predacons. With this gimmick in mind, Megatron – a different character to his original namesake – was initially proposed as a crocodile. This changed thoroughly shortly afterwards, and in the second wave of Beast Wars toys, Megatron could now change into a purple Tyrannosaurus; combined with Optimus Primal’s beast mode – a gorilla – this was engineered to be a cool homage to King Kong (and, seeing the purple colour – perhaps a fair bit of The Valley of Gwangi).

Of course, from the outset, Megatron’s Tyrannosaurus mode was never made with anatomical accuracy in mind, but rather a “pop culture” Tyrannosaurus, indubitably inspired by Jurassic Park three years prior. For the 25th anniversary of Beast Wars – and the original film’s 35th – Takara and Hasbro proposed a homage toyline featuring characters from both. While Megatron’s robot mode aims to show accuracy, he got quite the interesting overhaul for the dinosaur mode. Of course, given this website is Paleo-Nerd, this review will focus on the dinosaur mode.

Like the previous iterations, it is based on the Jurassic Park-type depictions of Tyrannosaurus, with a touch of “Retrosaur” aesthetic, but unlike them, the sculpture now features more naturalistic details like scales, scutes, and horn-like protuberances, and also seems to reference actual Tyrannosaurus skeletons. Of course, there still are obvious errors, such as the pronate wrists, the width of the skulls, shrink-wrapping, placement of the first toe, proportions, and so on. Seeing as anatomical accuracy was never the goal with this figure, criticisms of this type are – in essence – pretentious and shall be excised for brevity. Any dinosaur enthusiast can pinpoint them with ease.

The patterning on the skin looks intricate and, overall, the sculpting works perfectly, endowing the dinosaur mode with an unparalleled organic presence compared to any other Beast Wars figure that came before it. By extension, it seems to be the most well-designed beast mode in the Kingdom toyline.

To go along with the sculpture, the colour scheme – a combination of colour plastic casting and airbrushing – works perfectly well, considering the price range. In no doubt, the more ambitious and artsy collectors will be able to better bring life to the sculpture and its details by dry-brushing. The colours are very show-accurate, with dominant hues of purple, green (lining up the neck and back) and yellow (lining up the underbelly). The little, beady eyes are of an intense and shiny red hue, which is a great detail.

Of course, a transforming figure inevitably has a degree of the robot mode showing up in the beast mode. Among Transformers enthusiasts, this is colloquially called kibble. While there is a fair amount of kibble on the knees and at the base of the tail, this figure does a pretty good job at making the robot mode disappear in the dinosaur mode.

The overall plus-point of this Megatron – compared to previous figures – is the astounding range of motion in the dinosaur mode, which can boast over twenty points of articulation. This includes up-and-down head movement, jaw opening, side-to-side neck movement — but the real dealbreaker is the thighs. Previously, the only Beast Wars Megatron figure to be able to rotate its thighs forward and backward was the 10th anniversary figure, which traded the organic look for a biomechanical appearance, allowing for more articulation. Kingdom Megatron returns to an organic beast mode, and yet it can rotate its thighs – something that not even the $300 Masterpiece figure can do. This is due to quite the awesome engineering design that features — on the inner side of the thigh plate — a crescent shaped track along which a circular piece can run, allowing the thigh plate to rotate along with the rest of the leg – which is a separate unit.

As far as articulation goes, there are some lacking areas – such as the tail and the toes – but again, these are restraints associated to the comparatively low price, and they do not forbid a collector to place this Megatron in a wide range of cool and iconic poses. This is in stark contrast with the majority of Transformers figures whose alternate mode is an animal – where the beast mode tends to be stiff and non-articulated. More recent (and pricier) Masterpiece class figures seem to fix this issue, but as far as lower classes are concerned, the Kingdom Beast Wars series really has focused on giving the beast modes more articulation – and Megatron displays the best results of this effort. As with the robot mode, there also are pegs that allow attachments of other accessories sold separately – such as the ‘Blast Effect’ that can be pegged into the inside of the mouth.

One downside to both modes is the choice to use soft, bendy PVC material for most of the areas covered in dinosaur skin. This has a double purpose: it makes the skin more ‘real’ to the touch, and also prevents breaking of hard plastic in delicate places during transformation.

Despite the perfectly valid concept, the PVC skin also brings out certain issues of quality control. For instance, two square-shaped skin panels on the tail have the overall tendency to become curly even when the figure has just been taken out of the box, and are oddly-shaped or oddly-moulded – and they go beyond their supposed space. Some other pegs are also annoying to work with – such as those that connect the belly area to the pelvis. On the reviewer’s copy, they do not peg into the supposed port at all.

Another downside to the soft PVC skin is its sensibility to humidity (or lack thereof) as well as low and high temperatures, forcing collectors to store this figure in cool, fresh places without direct sunlight. As the figure is a recent release, only time will tell the overall endurance of the skin material – which hopefully will not crack or curl excessively.

The transformation into robot mode is not overly complicated and is actually an enjoyable process, save for the occasional moment where the PVC skin does not collaborate. There also seem to be quality control issues in certain pegs, which are very tight to piece together; this is also true when the figure is turned back into a dinosaur. When the collector is done transforming the figure, Megatron’s robot mode shines; he looks like he has jumped out of the TV screen.

Like the Masterpiece class version, the robot parts are very accurate to the animated series, to the point where – despite its relative size – the head sports a minute Predacon insignia on its forehead. The detailing, the painting and the multi-coloured ABS plastic satisfyingly brings the character to life. The range of motion – again, over twenty points of articulation – partially carrying over from the dinosaur mode allows for an enormous variety of poses collectors can place the figure into. This is partially – but again, not overwhelmingly – hindered by the backpack, which is surprisingly well-contained compared to other figures.

Again, the left arm in certain copies suffers from the same square-shaped panels that do not collaborate during the transformation – and this happens in many copies. In the reviewer’s copy, this has become an issue during the transformation (see pictures): the lower side paneling is supposed to bend all the way out, whereas these little panels get in the way, restraining the movement of the other panels. This seems to be a widespread problem, but a minor one – seeing as the panels can be re-bent into place and there are alternate ways of displaying the arm. By flaring the paneling out, the arm looks more like a shield, and has an additional aesthetic appeal.

Overall, the WFC-K Beast Wars Megatron is an amazing figure, even considering the price-dictated restraints. The choice to use soft PVC for the dinosaur skin may be controversial, but not overbearingly so. The figure is no doubt a great addition to the shelves of Transformers enthusiasts, or even just those nostalgics that saw Beast Wars as children. Fans of deliberately inaccurate ‘Retrosaurs’ may also get a kick out of the dinosaur mode. And if you are all three of these things… This figure is definitely for you!