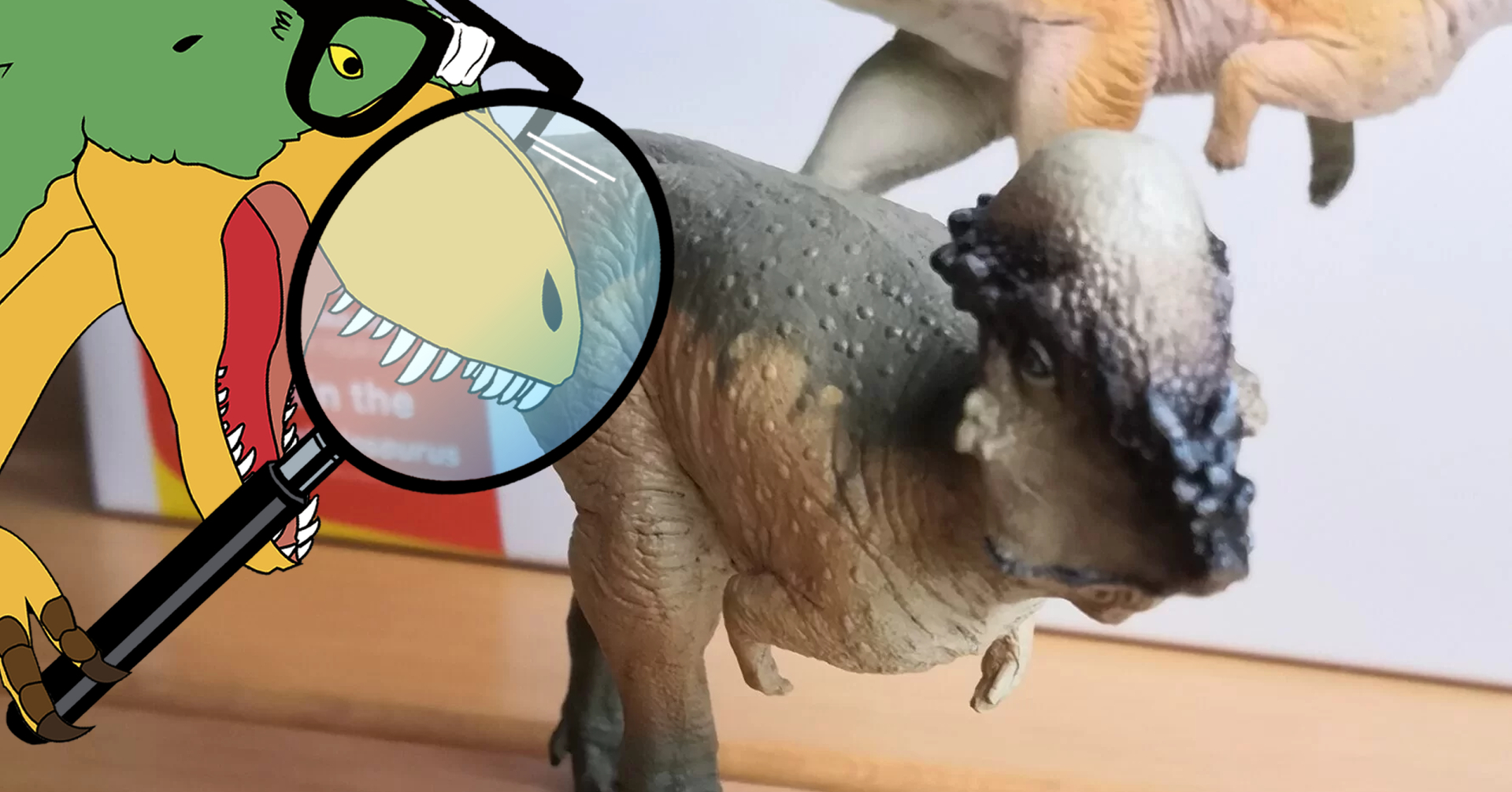 Pachycephalosaurus is certainly one of the most famous dinosaur genres despite the fact that until a few years ago the only remains at our disposal consisted of more or less complete skulls. However, “Fra Tuck” could not go unnoticed and immediately the idea that these animals, a bit like rams ante litteram, challenged each other with violent skulls both among themselves and to defend themselves from predators, made its way into popular culture. Could PNSO not represent this icon in one of its models?

Starting from the packaging, it is elegant and essential as usual. We find ourselves in front of the classic white cardboard box with orange writing in English and Chinese and a photo of the profile model proposed on three sides of the container. Here, as per PNSO tradition, you can read the name of the animal “Austin the Pachycephalosaurus”.

Once the wrapper is opened, we find inside the transparent plastic blister and the “ordinance poster” with a reconstruction of the animal on one side and on the other a short story for children that sees it as the protagonist. The blister contains the model, which is in turn wrapped in a sachet to avoid scratches or paint stripping due to friction, and the base divided into its two components.

We come Austin itself. Already at a first general glance one can only be pleasantly surprised. A little gem with attention to the smallest detail. The dimensions are obviously reduced because the Pachycephalosaurus although at the moment it is the largest genus of its infraorder, Pachycephalosauria, it is estimated that it reached “only” four and a half meters. Since the model is 18 centimeters long we are perfectly in the 1:25 scale. To be picky on the poster mentioned above, a length range from 4.5m to 6m is shown. Therefore, using the higher estimate, a scale of 1:33 would be obtained, which would almost fall within the classic range of 1:35 used for other larger animals.

The coloring is not particularly elaborate but certainly pleasant and realistic with the cream-colored belly that goes away, darkening going up the sides and the pistachio green back. The transition between the two colors is more subtle and structured in bands in the tail while it is more marked at the level of the body. The same green reappears at the ends of the hind legs. The skull, on the other hand, is always cream with parts that tend to dark brown along the base of the various horns that surround the dome. The various spikes stand out thanks to touches of gray that highlight them. Everything conveys a very natural feeling, a pity only for the obvious difference that can be seen with the model present on the cardboard box, much more cared for in terms of all those details of the head on which in the end it inevitably rests there. ‘eye. This is particularly noticeable at the level of the studs under the eyes completely ignored in the product that you have in your hands.

The pose is also relatively generic with the animal portrayed while walking, however the yield is excellent. The hind legs perfectly convey the sense of movement and weight loaded on the right foot, the base of the tail in turn is pulled to the right by the muscles anchored on the respective femur while the tip sways to the left with a very gentle and realistic curve. We know that pachycephalosaurs had ossified tendons along the caudal vertebrae, so the tail must have been relatively stiff, particularly at its final end. The body is also rotated slightly to the right, harmoniously continuing the curvature that starts from the beginning of the tail up to the tip of the muzzle. The center of gravity falls perfectly into the support base which, however, is not particularly wide. Austin stands perfectly on his own without the need for any support but in the long run the use of the base is recommended because especially in the heat the plastic of the feet could give those few millimeters that are enough to make the Pachycephalosaurus fall.

Let’s now get to the heart of the model analysis taking into consideration sculpt and anatomy.

On the rendering of the leather I think there is really no comment that can convey how accurate they were in sculpting even the smallest scales without giving that rough and coarse effect that can be seen for example in the Safari Pachycephalosaurus. On this basic texture stand out larger scales, small bumps the size of the head of a pin that vaguely recall the similar pattern found in the skin of Triceratops. At the moment, no integument impressions of any type of pachycephalosaurus have been found, so opting for a structure similar to the closest clade, or ceratopsids, is the most appropriate choice. Also here one could speculate on the possible presence of filamentous structures similar to those present on the tail of Psittacosaurus, however at the moment it is only a possibility, in theory equally valid, but certainly more pushed and less conservative.

The head is the part of the animal on which we can make a discussion of comparison with the remains we have available since we have a single specimen of the postcranium, nicknamed “Sandy”, which however has not yet been officially described. In theory, any non-described rest does not exist on a scientific level but just take a look at a search engine to find photos so we will make an exception.

Let’s start with the general shape of the dome. This fits perfectly with the fossils we have, therefore not a perfect hemisphere as we sometimes see, but a sort of half pear with the narrowest part facing forward. Personally, rather than the scaly pattern in the area where the shell and the “studs” meet, I would have preferred something that simulated a keratinous thickening and maybe it could have been colored with more vivid colors, as can be seen in part on the photo of the box, but I can’t define these true mistakes.

All the various boxwoods and thorns reflect the distribution that we see in the specimens found. It must be said that these basic ones have a certain inter-individual variability, so some slight variations in shape and size are perfectly acceptable. However, it should be noted that these growths, especially those in the posterior region, do not look like flattened bumps but are real squat spines in the model. And this is where Sandy comes into play and the whole question of the theory of Dracorex-Stigymoloch-Pachycephalosaurus as a single genus which, however, radically changes the shape of dome and spines as it grows. The theory is famous and we will not be here to summarize it, it is enough to know that in practice, during growth, passing from Stigymoloch to Pachycephalosaurus, the long spines of the former would be reabsorbed until they become the blunt bumps that can be seen in the latter. Sandy has been identified as Pachycephalosaurus but still has some elongated spines. So it is safe to assume that the PNSO model takes its cue from these fossil remains. Furthermore, further analysis seems to have determined that the remains with the shorter bumps would come from older sediments, while in the more recent ones the “horns” would be away, away longer. Only further studies will be able to confirm the matter.

We come to another much discussed topic, the cheeks. In the PNSO we do not see the classic fleshy cheeks often adopted for herbivorous dinosaurs and instead opted for more prudent reptilian lips. Here, too, both types of reconstruction are equally valid at the moment, so any criticism would depend more on personal tastes. Personally I would have only colored or in any case made the edge of the mouth more evident that although it is sculpted almost disappears without the right lighting.

On the tip of the muzzle the holes of the nostrils and obviously the beak are visible, as well as behind the infraorbital growths there are the auricular ones. In frontal view it seems that perhaps the thickness of the head is not quite correct, it tightens a little too far forward and the jawline may be too thick. The eyes are of an intense blue and are very reminiscent of those of a bird, also this is now a fairly common feature in the PNSO home. The neck attaches under the skull and not behind, a typical feature of pachycephalosaurs and is muscular at the right point.

As for the rest of the body, both the hind limbs and the front ones have the right proportions. The number of fingers is also correct, four on the feet and five on the hands. The hands in particular have palms parallel to each other and are not pronated. The torso is very voluminous and barrel-shaped, as one would expect from a herbivore. Finally, the tail has the right length, perhaps it would have been better to make it slightly more massive especially at the base since the muscles that moved the legs were anchored there. However, given the almost total lack of Pachycephalosaurus caudal remains, I wouldn’t go any further.

Ultimately Austin, the Pachycephalosaurus, also seen the more than affordable price for being a PNSO, is absolutely a must have both for the choice of the subject, for the artistic rendering, and for the value of scientific reconstruction that takes full hands from the most recent discoveries on this genus of dinosaur.