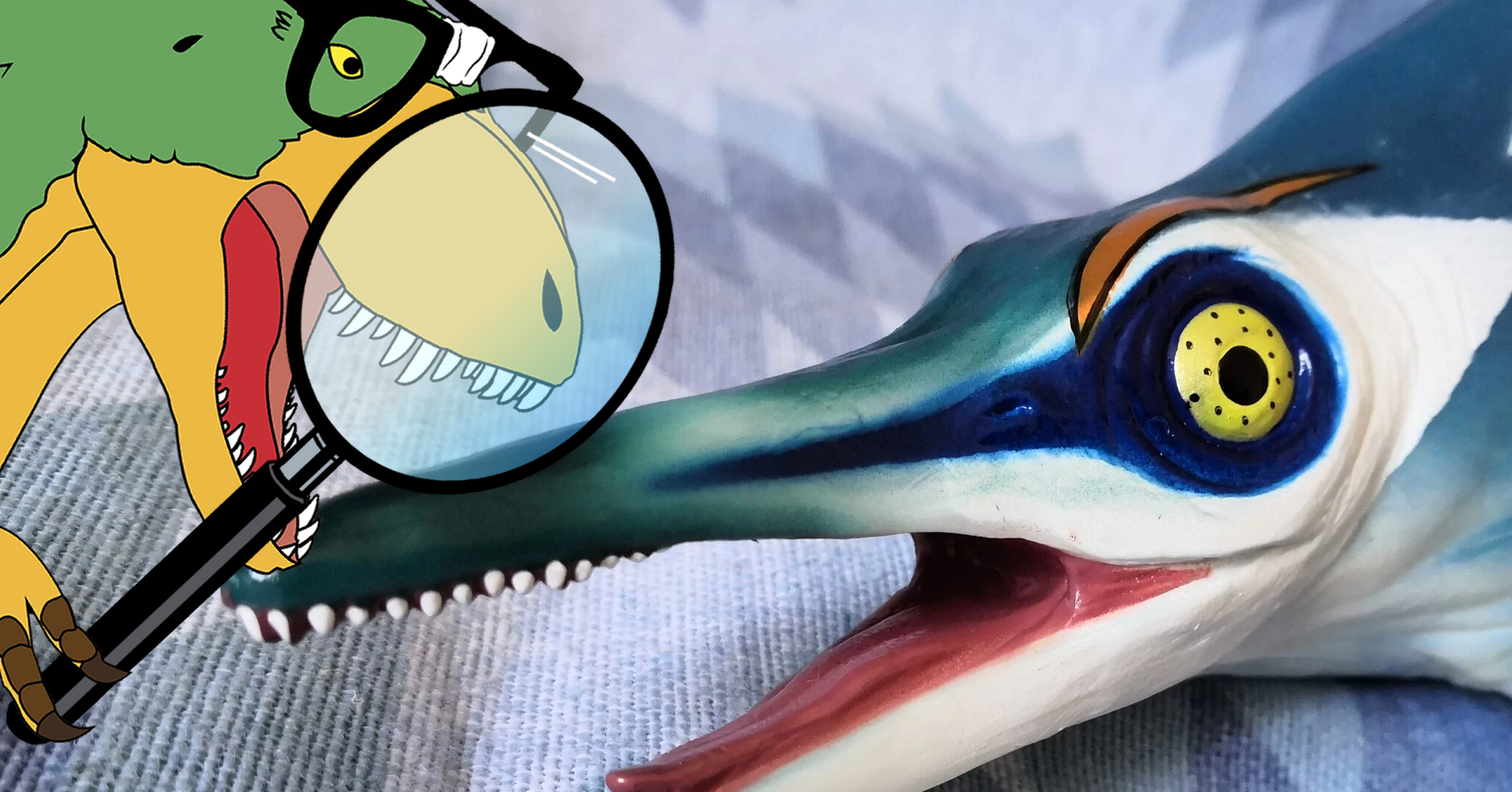 Recur is a company specializing in toys that has recently started to make models. The Ophthalmosaurus subject of this review is precisely a toy and therefore will be analyzed as such.

Ophthalmosaurus is one of the most famous genus of ichthyosaurs and certainly needs no introduction. The Recur has the advantage of being identifiable at first glance unlike many other toys that end up being “genericsaurus” with a name attached to it. The tag linked to the model then clarifies any possible doubts.

At first glance the first thing that strikes you about this “eye lizard” is its size. We are talking about 30 cm of marine reptile, scale 1:20 if we consider an animal of 6 meters. Once you take it in your hand, however, you realize that it is a toy, it is lighter than you might expect because it is made of soft PVC and is hollow inside. This is not to be considered as a negative point. Its size, weight and consistency make it suitable for a child to handle safely. You could easily immerse it in a bathtub or take it to the sea and it wouldn’t blink… also because it can’t!

The second strong point of this toy is the coloring. It is lively, not at all monotonous, with a pattern that one might easily expect from a living animal. There are no smudges and the colors chosen stand out for fantasy compared to the usual green or brown. The white and light blue work very well while the dark blue and orange details stand out without becoming an eyesore. Just the inside of the mouth is a little flat, a few more gradient of colour would have been needed here, but otherwise there is really no objection.

Talking about scientific accuracy in these cases would be like shooting the red cross, but this Ophthalmosaurus manages to defend itself well. Excellent yield of the skin, smooth with no scales on display but furrowed only by folds similar to those we might see in current cetaceans. The body proportions are allright and you can see the hydrodynamic shape of these animals, perhaps in this specific case even slightly too tapered. The back should be a little more arched after the head so as to form almost a sort of small hump and the dorsal fin for this same reason would slide further back. Nothing particularly serious, absurdly enough to press the model slightly on the sides to make it assume the correct shape in side view.

Fins are fine. The pelvises are much smaller than the pectorals and all four are sturdy and rounded. The caudal may appear misshapen due to the pose, but in reality it too has been well reconstructed.

The head is the only part that would need some minor changes. The shape follows the skull well but at the junction of the neck it would need a little more musculature. The nostrils are in the correct position as well as the eyes which, however, are a little too large. It is true that the name Ophthalmosaurus means exactly “eye lizard” but in this case, perhaps just to bring out this feature it has been slightly exaggerated. The pointed and thin rostrum is perfect, only the yield of the teeth should be improved. There are genera of ichthyosaurs with very respectable teeth, but among these there is not Ophthalmosaurus. In the case of the toy, the ideal would have been just notching the edge of the muzzle and jaw and sculpting the teeth, which in the animal were small and numerous, up to where it is seen that they are present in the fossil. Paradoxically, if they hadn’t been careful to color the teeth one by one up to the base but had limited themselves to the tips, the result would have been visually better. These small problems, however, are due more to the fact that, as already stated several times, we are dealing with a toy for children and therefore here is the desire to “show your teeth” to make it fight or enlarge the characteristics that most characterize it to make it more recognizable.

Finally a few words about the pose. It is to be appreciated that they managed to make sure that it could stand firmly on the ground without having to position it in a neutral way. In fact, if at first glance it might seem that there is something wrong, it is simply because this model, to be appreciated at its best, should be placed on a display base that holds it raised on the right. Thus magically the tail that seemed too bent becomes almost straight and other parts that seemed asymmetrical are rearranged. From this angle it becomes clear that the ichthyosaur is portrayed while it is turning to the left using its pectoral fins to stabilize itself.

So, final thoughts. If we consider this Recur as a simple toy, we cannot help but appreciate the level reached and I am sure that as a child I would have been delighted to have it in my hands while on television I saw these ichthyosaurs swimming in the third episode of Walking With Dinosaurs. As a collectible model it can work. In the face of a few incorrect details, most of which can be corrected with a little paint, at a low price you have a large, well-colored Ophthalmosaurus with a discreet pose in your hands. Ultimately I can not help but promote it.