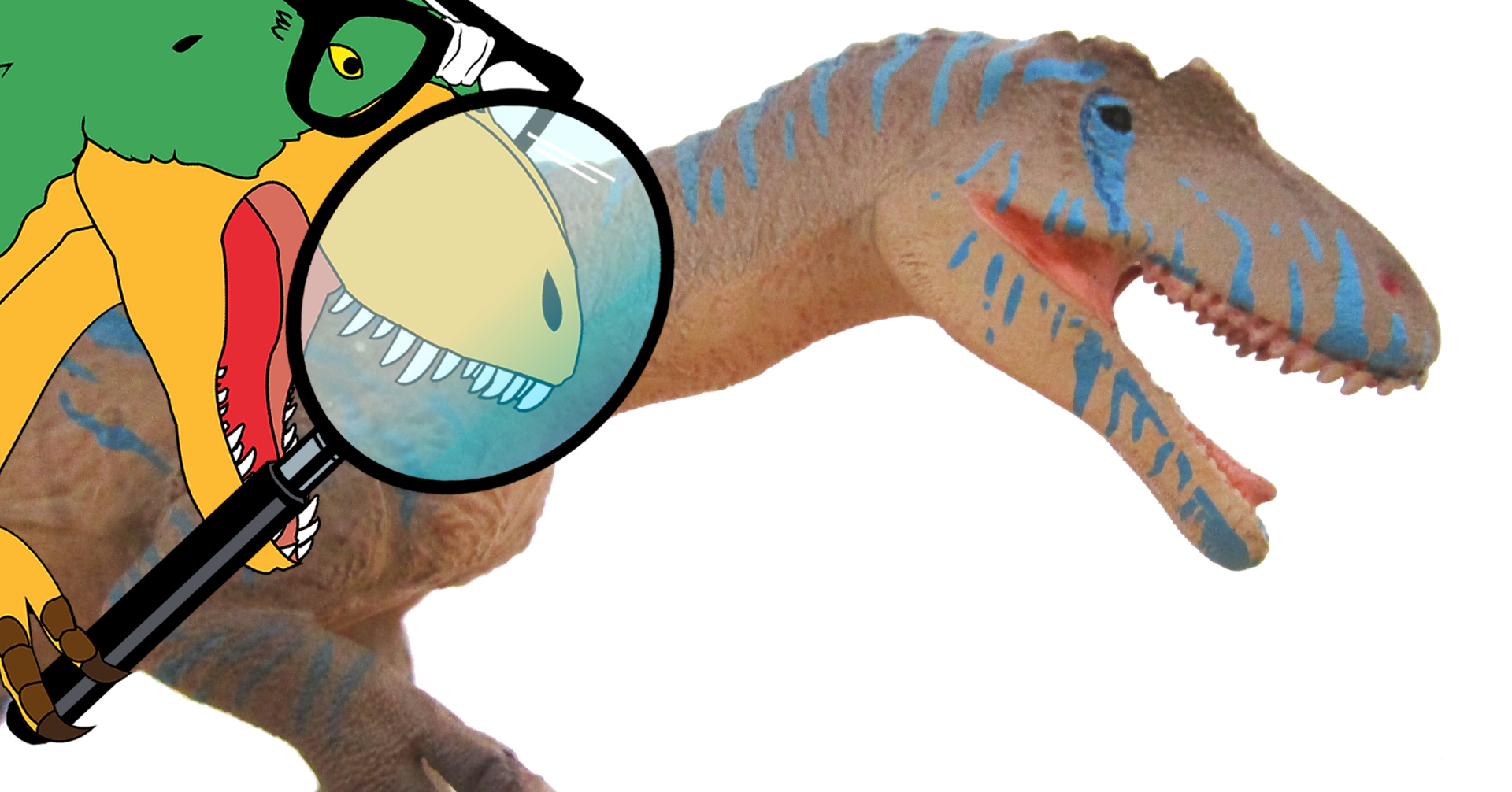 Have you ever been in a museum, saw a dinosaur model on display and wanted a copy of it? With Chilantaisaurus Vitae you can do it! But let’s go in order. Chilantaisaurus is part of the medium-sized Vitae models line released in 2018; after the temporary disappearance of the company, in 2020 it was marketed again in three versions: cheap (with a simplified painting), regular (like the 2018 version) and Deluxe (including a base and sold inside a cardboard box). For informations about the packaging, see the Sinraptor review.

Despite being described in 1964, due to the incompleteness of the fossils and the combination of characters it shows Chilantaisaurus tashuikouensis remains one of those mysterious theropods which paleontologists do not know where to place: today it’s believed to be a megaraptora or a carcharodontosauridae. Whatever is its placement in the theropod tree, it was an imposing animal: it has a femur of 119 cm and a 58 cm humerus, one of the largest humeri among the theropods – excluding taxa like Deinocheirus and Therizinosaurus (Molina-Pérez & Larramendi, 2016). It’s therefore surprising that on the package is written “1:35 Scenario Set”, the same as other Vitaes, while it’s one of the smallest models in the line.

But remember I said that by buying this model you have in your hand the replica of a museum statue? Well, the museum is the Zhejiang Natural History Museum (China) but you don’t have to travel that much to see the statue: you just have to go on Cheung Chung Tat’s Facebook page, who sculpted it as he sculpted all the Vitaes. After admiring the statue, it’s possible that your eyes shift to the caption: scale 1:6, length 100 cm. A quick math tells us that the animal represented it’s only six meters long. But this is unlikely to be the size of Chilantaisaurus: for comparison, the femur of AMNH 290, an Allosaurus more than nine meters long, is one fifth shorter (98 cm).

In the same region where the museum is located, however, there were unhearted fossil remains of another theropod assigned to the genus Chilantaisaurus: “Chilantaisaurus” zheziangensis. Why quotation marks? Weell, it looks like that – whatever exactly C.tashuikouensis is – “C”.zheziangensis does not resemble it much and that it might be a Therizinosauridae (Hartman et al., 2019). Most importantly, the incomplete remains suggest a much smaller animal, about 5-6 meters long. If we put the Vitae Chilantaisaurus in 1:25-1:26 scale (which it looks like to be the real scale of the Vitae models, instead of advertised 1:35), it results in a 5-6 meter animal! Most importantly, the incomplete remains would suggest a much smaller animal, about 5-6 meters. And if we put the Chilantaisaurus Vitae in scale 1:25-1:26 (what looks like the real scale of the Vitae, instead of the 1:35 announced on the boxes), it is actually a 5-6 meter animal! So here’s what we concluded: probably the committent asked Cheung Chung Tat to sculpt Chilantaisaurus, but gave him outdated informations or simply forgot to inform him that “C”. zheziangensis shares only its name with C. tashuikouensis.

To restore Chilantaisaurus, Cheung Chung Tat relied on Scott Hartman’s Neovenator skeletal: the choice of the genus is good, considering that if Chilantaisaurus was a Carcharodontosauridae, it would be rather close to Neovenator and that at the time even Megaraptorans were considered related to this genus (Benson et al. 2010); the problem is that, due of this reason, Megaraptorans they were used to fill the gaps in the skeletal and thus Hartman’s work is a chimera of Neovenator and various Megaraptorans (Neovenator restored using only Carcharodontosauridae looks a bit different). Such problems are unfortunately quite common when restoring an incomplete animal of uncertain placement, so we can’t exactly blame Cheung Chung Tat for it.

The skull of the model follows cloely Hartman’s skeletal. The skin is smooth to the touch, a fact that can be considered “little detailed” but that – if we take into account the size of the scales associated with theropods – it’s probably more accurate than sculpting every single scale and thus make it ten times larger just to make it visible. There are roughness on the lacrimal and postorbital (where carcharodontosauridae have keratinous covers), and a row of larger scales runs down the postorbital to the jugal, delimiting the posterior margin of the orbit. The teeth, although not sculpted individually, are sculpted with care and the pink between one and the other simulates the tissue of the oral cavity and helps to disguise the fact that it’s a single block of teeth. The inside of the mouth is sculpted with the care that we expect from the Vitae models: the palate is flat and the coanae are present, even if they are difficult to see as they are not very sunken and covered by glossy paint.

Along the neck it begin the three ways in which the scales of this figure were sculpted: there are areas where the pattern is smooth and only the skin folds are sculpted – as on the abdomen – probably to indicate areas where the scales were too small to be visible; most of the body is covered by a very fine work of sculpture; multiple rows of scales start from the nape of the neck and reach the end of the tail: we have no evidence of such structures in Allosauroids, but at the time when the model was made it was an art meme for other theropods (Carnotaurus) that had not yet been falsified (Hendrickx & Bell, 2021).

As for all Vitaes, there is no shrinkwrapping: the scapula is well hidden inside the body, the pubic boot does not stick, the tail is thick and the ileum stands out only for to a row of raised scales placed above it. One of the few external features that we can be certain of from the fossils of Chilantaisaurus is that it possesses a large claw on the first finger of the forelimb, comparable in size with that of Baryonyx (although Chilantaisaurus was a larger animal, so the claw is proportionally smaller) (Gasca et al. 2018): the Vitae model also shows off. Take note how – correctly for most theropods – the first finger is shorter but has the larger claw, the second is longer and the third is of intermediate length between the first two, too.

What immediately catches the eyes, in Cheung Chung Tat’s statue, are the colors: on the sand-colored body the bright blue stripes strongly contrast. It has been done a very accurate work to bring these coulors in the model, too: they charaterize both the regular and the deluxe versions, leaving almost monochromatic only the cheap one. The regular version also has a drybrush of a darker tone of background colour in the upper part of the body, to highlight the scales, leaving the sides and the abdomen of the background color. The deluxe version, on the other hand, has the sides and the abdomen painted ivory. The base, present only in the deluxe version, shows a dried soil, with cracks in the mud and two small plants. We refer you to the Sinraptor review for details of the Vitae bases, specifying only that Chilantaisaurus also has a magnet (under the left foot).

To sum it, there may be some doubts about what the model actually represents, but not about its value: the Vitae Chilantaisaurus it’s a rare opportunity to own a replica that can truly be called museum.

Gasca J.M.: Díaz-Martínez I.; Moreno-Azanza M.; Canudo J.I.; Alonso A. (2018) A hypertrophied ungual phalanx from the lower Barremian of Spain: Implications for the diversity and paleoecology of  Spinosauridae (Theropoda) in Iberia. Cretaceous Research. 84, 141-152.