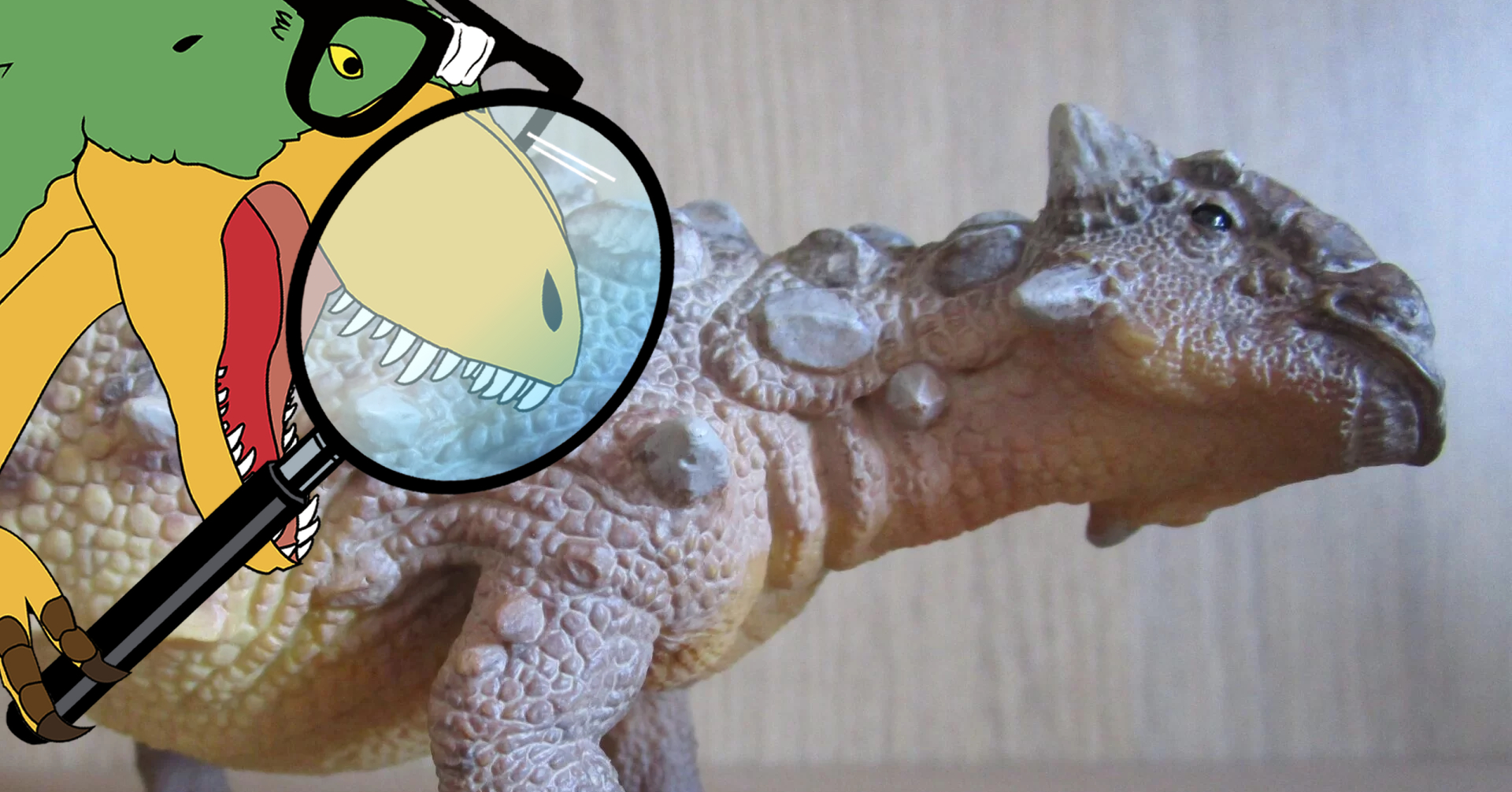 Despite being the genus that gives its name to the Ankylosauridae family, Ankylosaurus magniventris is far less well known than paleontologists would like. The lack of a fossil with articulated osteoderms in situ prevents a certain reconstruction and to this is added the tendency to generalize the Ankylosauridae: leafing through any children’s encyclopedia on dinosaurs one gets the impression that they were practically all the same and this impression is also present in the models, which are often based on Scolosaurus cutleri whatever the animal to be reconstructed or which create strange hybrids, such as the Papo model. In the worst case, the anatomy of the animal is completely made up: are your ears ringing, Jurassic Park saga? In 2019 PNSO produced their own Ankylosaurus, the first model of their economy series. It secured a great deal of prominence because, at a fraction of the cost of previous products, it was possible to take home the most accurate low-cost Ankylosaurus figurine ever made.

Examining the skull, the level of detail of the PNSO model is immediately evident: it is possible to compare the osteoderms (the cranial ones are called caputegula) with those of a fossil specimen (AMNH 5214), at least the largest. Starting from the lateral and posterior part of the skull, the scaly horn and therefore four osteoderms can be counted, exactly as in the fossil (assuming that the supranarial caputegulum is hidden by the beak). They also appear roughly the right shape, with the posterior supraorbital caputegulum larger. Four osteoderms are aligned in the nuchal area. The detail of the PNSO model is too small to distinguish the various types of caputegula of the cranial roof, however it is noted that they begin correctly beyond an imaginary line that joins the posterior supraorbital caputegula. Immediately above the horny beak, the large medionasal caputegulum is observed in a central position. The same can be said of the lateral view of the skull, even if the quadruple horn is probably too small. One of the diagnostic characters (apomorphies) of Ankylosaurus is the fact that the nostril is not located in the frontal position, as in the other ankylosaurs, but in a lateral position. Arbor & Mallon (2017) note that this could be an adaptation to excavation, perhaps to recover otherwise inaccessible food (e.g. tubers) unearthed with powerful forelimbs.

The tip of the snout ends in a large horny beak that would have allowed Ankylosaurus to feed on a wide variety of plant material. It seems that the shape of the beak is perhaps more suitable for selective feeding than – for example – Euoplocephalus. Over the years, several theories have been formulated on the feeding of the Ankylosauridae, some that would like them myrmecophages, but are outside the comment of the PNSO model. However, it can be emphasized that, as the figurine lends itself in a diorama to being placed in front of a bush it would be feeding on, its pose is equally suitable for exploiting a termite mound. To the imagination of users the best use.

In 2014 Arbor proposed a new arrangement of Ankylosaurus osteoderms, still the most updated, and this model is the first to follow it, unlike – for example – the practically contemporary Safari. Seen dorsally, Ankylosaurus would have possessed two cervical half rings, with six osteoderms each. The PNSO model correctly shows six osteoderms in both cervical rings, but the outermost osteoderm of the first ring (if that is the case) shows a strange intermediate position between the two rings and a shape dissimilar to what appears in the skeletals. In the Arbor & Mallon reconstruction, the torso of Ankylosaurus has four osteoderms in the first two transverse rows and six from the third to the sixth. The PNSO model added two additional osteoderms in the seventh row. From the seventh (eighth for the PNSO model) osteoderms return to being four per row. An arrangement with five rows of six osteoderms is visible in a GetAwayTrike skeletal, but even this skeletal has only seven rows of dorsal osteoderms, rather than eight like the PNSO. It appears that the sculptor PNSO added a row of osteoderms.

Below the flank line, the GAT skeletal has three rows of osteoderms that do not extend to the hind limb, while the PNSO model shows three that extend to the hind limb. The GAT reconstruction has only two large osteoderms on the upper forelimb, while in the PNSO there are three, and an osteoderm “sleeve” that resembles the Asian Ankylosauridae along the forearm, which are not present in the PNSO model. Compared to nodosaurs, ankylosaurs reduce the number of toes in the hind limbs, going from four to three respectively, while retaining five toes in the forelimbs – as faithfully reported in the PNSO figurine.

The Arbor & Mallon skeletal has nine rows of caudal osteoderms, while that of GAT only eight. The PNSO model is congruent with that of Arbor & Mallon, with nine rows of osteoderms. Although Ankylosaurus is the largest known Ankylosauridae, its caudal club is not excessively large, especially when compared in proportion to the enormous one of Anodontosaurus lambei. The reconstruction to which popular books have accustomed us is that of two bone hemispheres, but it is a generalization based on related species: the Ankylosaurus club is known and has a basket shape, more in line with the majority of Ankylosauridae. The club is properly formed from two larger and two smaller osteoderms. In the caudal club we can also observe the only true error of the PNSO model: the tip of the tail is oriented downwards, probably suggesting the great weight of the structure, but this configuration is impossible: the terminal vertebrae of the tail of the Ankylosauridae equipped with mace were fused together and stiffened to form the “handle” of the weapon and could not have bent in that way even if they wanted to. However, this is easily solved by heating the tail tip in hot water, repositioning it as desired, and then submerging it in cold water.

One of the reasons for the great success of the Ankylosaurus PNSO was in the detail of the sculpture and coloring. On the one hand, the “rounded” appearance of the animal (i.e. devoid of thin horns, sharp claws, tail tips) has allowed PNSO not to have to smooth out any detail for safety reasons – which can be annoying, for example. for example, in the Safari models – on the other hand, being the first model of their economic line, it enjoyed the same coloring quality as the other PNSOs – figurines worth more than 50 euros. Unfortunately, this last advantage did not last long: as we know, as models age, companies tend to try to save on coloring – one of the most expensive steps in production – in favor of new releases. In addition, the story also circulates on Chinese sites that the decline in Ankylosaurus coloration is due to a change of factory. Whatever the truth, the Ankylosaurus available for purchase in 2021 is by no means unpleasant to the eye, but features a simplified coloring compared to the richness of the original. In particular, it has undergone a rather heavy wash with a gray paint, which gives the impression that the animal has just come out of a mud bath. I read on Chinese forums that scratching it off should at least partially restore the original color, but I didn’t have the courage to carry out this experiment. I also point out that the model is lighter than one would expect. It might indicate that it is hollow on the inside but, again, I preferred to avoid invasive verification.

In conclusion, apart from some doubts in the arrangement of the osteoderms – which however remains speculative – and the wrong position of the terminal part of the tail, Ankylosaurus PNSO represents the best economic Ankylosaurus available, and its conspicuous size (it is in scale 1:26 for AMNH 5214, while it drops to 1:32 for CMN 8880, the largest known specimen) make it a versatile component of dioramas designed to represent the terminal phase of Masstrichtian North America, when it coexisted with famous dinosaurs such as Tyrannosaurus and Triceratops.