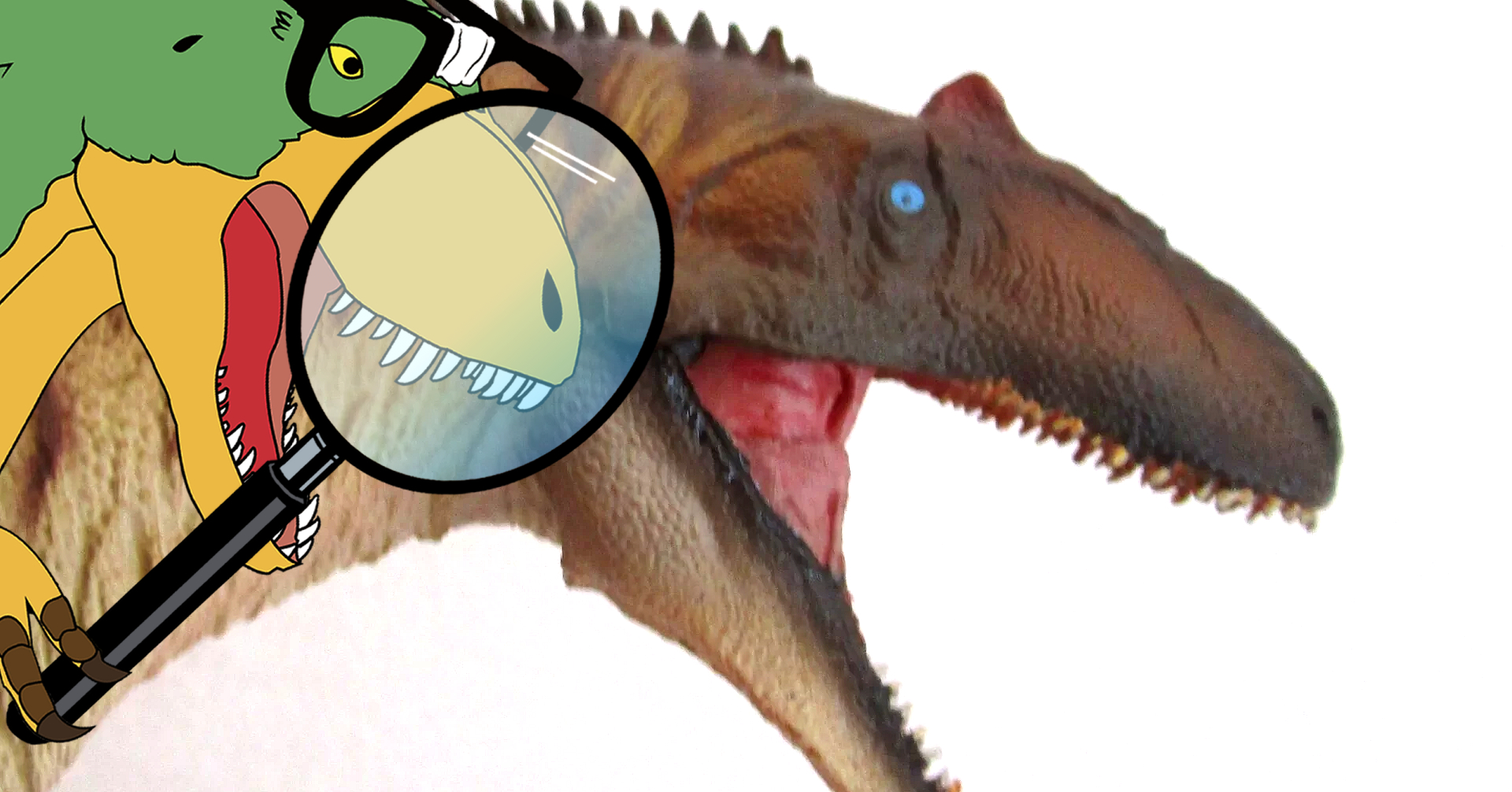 If we consider that Allosaurus is the animal to which Marsh anchored the very definition of Theropoda (along with other genera that turned out to be synonyms of Allosaurus itself) and that it is one of the best known dinosaurs, thanks to the dozens of fossils found in the Morrison Formation, it is surprising that it took years to have a reconstruction of this animal. While Tyrannosaurus, Spinosaurus, and Giganotosaurus also saw more than one release per year, for those showing the best allosaurus readily available on the western market it was the Papo, which – though made remarkable by a metal look – isn’t the most accurate. of the reconstructions. Finally in 2019 Safari released a remarkable version, the work of sculptor Doug Watson – and in 2021 it was the turn of PNSO.

Many complained when the model came out that it didn’t match the image they had of Allosaurus. This is dictated by two reasons: First, a complete Allosaurus skull has not been known for years. The reconstructions in the museums were composite specimens assembled with stucco. Even Madsen, author of a very important osteology on this animal, found himself working with a composite skull while the original was in preparation, and this consecrated the short, arched head that many associate with Allosaurus. Too bad that the real skull, in an excellent state of preservation, revealed a different story: DINO 2560 – this was the name of the specimen – was more squared and rectangular, different from the classical reconstruction. As much as many museums have updated their montages, the old version is hard to die for. So far I have talked about Allosaurus, and probably many readers have understood that I was referring to the best known species, the one named by Marsh in 1888: Allosaurus fragilis. But there is a second species of Allosaurus, known informally for at least twenty years but which only received an official name in 2020: Allosaurus jimmadseni. If the name makes you ring a few bells: yes, it’s in Madsen’s honor. To this second species belongs what is probably the most famous specimen of Allosaurus of all, thanks to the BBC documentary that saw it as protagonist: Big Al (MOR 693).

In a reply to a comment on Instagram, PNSO would have confirmed that the model would belong to the A. fragilis species and was therefore thought to have been modeled on the basis of DINO 2560; I, however, disagree. At the moment the skull is the only part of A. jimmadseni to be described (Chure & Loewen, 2020), but it exhibits several apomorphies (i.e. anatomical innovations that distinguish an animal from related forms): those that are most evident once added soft tissues are the jugale – the bone in correspondence of the “cheek” – straight (in A. fragilis it forms a curve) and blade-shaped ridges on the nasals. Observing the PNSO model, we can see the same characteristics: ridges that continue to the tip of the muzzle and lack of the jugal angle that characterizes A. fragilis. I proceeded to compare the model with the illustration of DINO 2560 found in Chure & Loewen (2020), then with DINO 1156 (an immature specimen of Allosaurus jimmadseni) as illustrated in Chure & Loewen, 2020 and finally with a skeletal of MOR 693 modified by Hartman present in the same paper. It can be observed that the proportions of the PNSO model resemble A. jimmadseni more than A. fragilis. A criticism that had been leveled at the attribution to A. jimmadseni of this model was the width of the skull, which some believe to be closer to A.fragilis, but comparing it with some frontal views of MOR 693 from, I personally do not notice a particular difference. Therefore, for the purposes of this review, I will consider the PNSO model to represent A. jimmadseni.

The fact that it is possible to distinguish the species from the observation of the skull testifies how faithfully it was sculpted. The nostrils are in the correct position and small scales – probably too big for the scale, actually, but they are really minute and probably the smallest the sculptor was able to reproduce – cover the head, except for the tear crests. When I saw the first photos the ridges didn’t drive me crazy, because – between the coloring and the way the sculpture highlights the lower edge of the keratin – they almost seemed glued there later. With the model in hand, however, I can say that this detail is practically imperceptible live. At the angle of the mandible, where there is the joint to open the jaws, there is a “lump” of an unspecified nature. It is not clear to me if it is meant to represent the musculature, the tissues that would cover the area or if it is only there to cover the joint. This too is a very unsightly detail in photography but you don’t notice that much from life. The upper jaw has the correct number of teeth in the maxilla, while a couple more would have been needed in the dental. They are sculpted and colored relatively well, given their millimeter size. On the palate, as is traditional for the PNSO, the choanal openings are visible, moreover the palate has a shiny wash to simulate the saliva of the animal. I don’t know if this is an oversight of my model or a general error, but the wash is absent in the lower jaw.

A description of the postcranial anatomy of A. jimmadseni has not yet been published, but from the skeletals made by Scott Hartman it does not seem to deviate in a macroscopic way from that of A. fragilis. MOR 693 is a medium-sized Allosaurus (estimated length: 7 meters) and with increasing size Allosaurus becomes more massive, so it is appropriate that the PNSO model represents a relatively slender animal. The torso is relatively narrow and flat, a common – but not exclusive – feature of the Allosauroidea, and is rectangular when viewed from the front, as opposed to the more rounded section of Tyrannosauroidea, Megalosauridae and other models such as the Papo. Along the back runs a row of horny spines, a rather common artistic trend in reconstructions (they serve to give the animal a more interesting aspect) although there is no evidence of their presence (similar structures have been found in a Diplodocidae and some Hadrosauridae) . Science is in possession of some skin imprints attributed to Allosaurus, however they have not yet been described (therefore officially they do not exist); the model however shows a fairly plausible speculation, with small scales interspersed here and there by larger tubercles (similar to those of Carnotaurus). The skin forms folds along the right side of the flank and neck, because the animal is turned in this direction.

The forelimbs are of the appropriate length, as opposed to various models that continue to perpetrate the meme of representing Allosaurus with much longer arms, due to early reconstructions using composite skeletons of various specimens. Although it is not possible to distinguish the phalanges, the relationship between the length of the various fingers of the hand is correct. On the back of the toes there are scutes similar to those found on the foot of birds and other theropods. As far as I know, this is an artistic meme and no proof has been found, but I remain available for corrections. The claws probably had larger dimensions, due to the keratin that covered them (we in the fossils do not see the claw proper, only the phalanx that supported it), while it seems that the sculptor PNSO has reported only the length of the fossil.

The hind limb is sturdy, as it should be to push the ton of weight of a real Allosaurus: thankfully PNSO is among the firms that are moving away from the trend of shrinkwrapped Gregory Paul-style reconstructions. Here too there are folds of skin that highlight the movement of the animal, for example on the left heel (remember that theropods were ditigrades). Along the ankle there may be some scutes similar to those found in Concavenator, but the sculpture is not the finest and the color does not help, so maybe I just see what I would like to see. There is no doubt, however, that the toes have the right length: the Allosauroidea had surprisingly small feet. A feature of the PNSO models is that they also report the anatomy of the underside of the foot, which many others prefer to leave flat. Where the model perhaps loses in stability, it gains in realism. The second finger has three phalanges and the third four (remember that the ungual is a phalanx), while it is impossible to count them by the fourth.

Like the hind limb, the tail is suitably muscled. The most observant will perhaps be bothered by the fact that – at least in my specimen – certain sections of the tail exhibit an apparent loss of detail: in my case, the front quarter, before the red tinge begins. However, I specify that I only noticed when I examined the model for the purposes of the review, otherwise I doubt that I would have noticed. Other photos seen on the internet show a decrease in detail on the back of the right thigh. The cloaca is present and appears to be in the right position with respect to the ischium. The sculptor decided not to represent the scutes that found themselves on the underside of Concavenator’s tail and, by a process known as phylogenetic inference – the same for which we state that Smilodon had fur despite never having a single hair found. – applicable at least to all Allosauroidea. It is not clear whether due to forgetfulness, ignorance or disagreement about their presence.

Starting with Parasaurolophus, PNSO has introduced an artwork into the packaging of its models. That of Allosaurus depicts him during the fight with a Stegosaurus, heralding the release of an updated version of “Biber” – as it actually was. The illustration is folded in eight, but a few days under a heavy book are enough to return it to its original state – ready to be framed. The now ubiquitous PNSO stand was also included in the box, but with this model it’s not particularly effective and I haven’t found a way to fit it properly yet. As soon as it is unpacked, the model stands upright, but it only takes a few days for its balance to shift and start falling on its side.

In all honesty – between its not very low price and fairly usual aesthetic choices – the Allosaurus PNSO did not excite me too much, but after doing the proper research to write this review I ended up re-evaluating it positively. It is a small gem, certainly helped by the fact that there is a lot of material available for Allosaurus, and it will be a perfect companion for the soon to be released Stegosaurus.