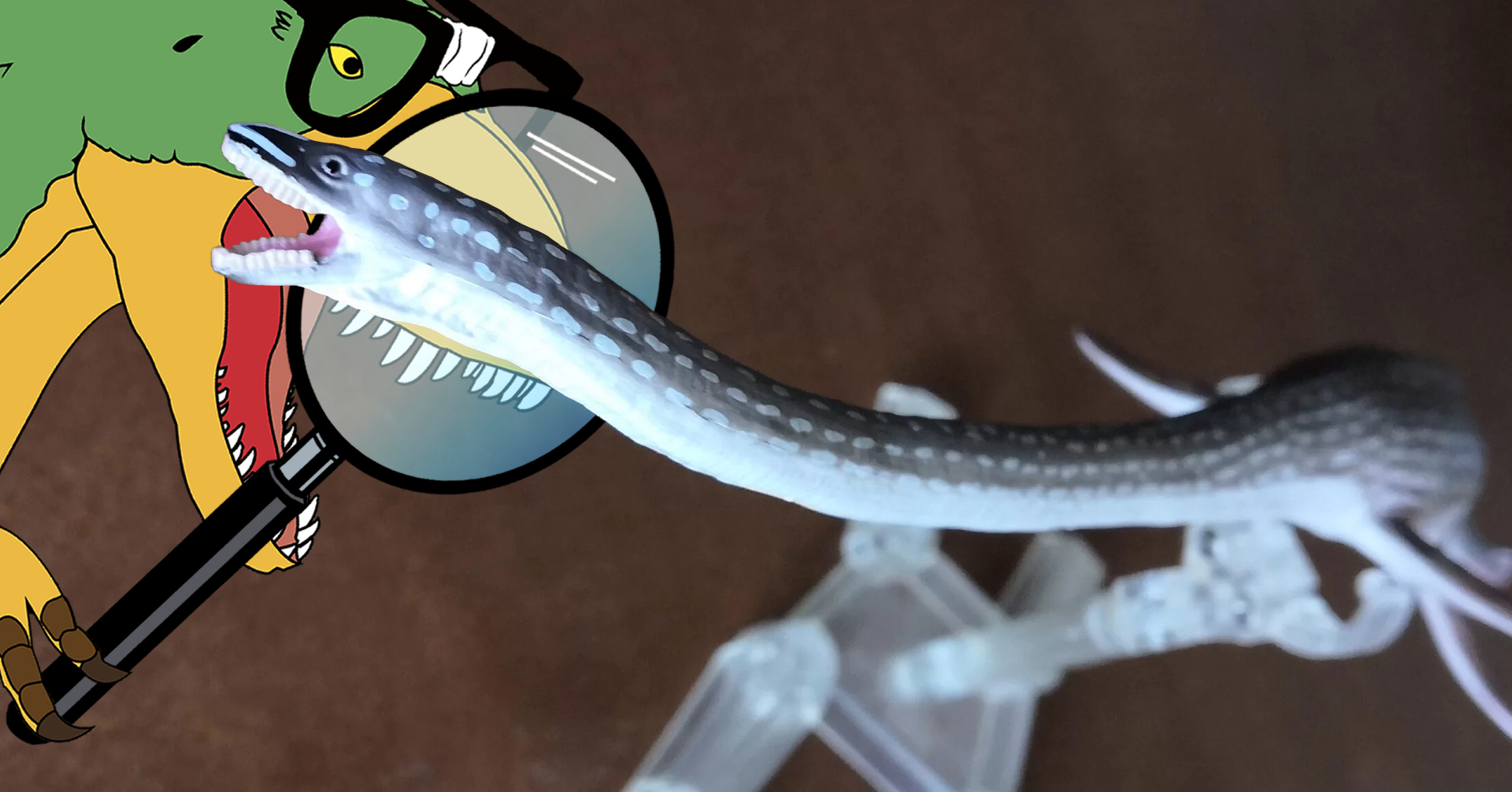 Elasmosaurus platyurus, literally the “thin plate lizard with a flattened tail” is one of the many Mesozoic species discovered during the famous “bone war”. It is famous that Edward Drinker Cope initially reconstructed the animal with the head placed on the tip of the tail. Its peculiar body proportions together with the period of its discovery meant that this plesiosaur quickly became famous to the general public even if it was not a dinosaur. This marine reptile lived about 80 million years ago in the so-called Western Interior Seaway, a relatively shallow inland sea that covered the central part of what is now the United States, dividing America into a western and an eastern region.

Let’s see what Collecta offers us! The model is very slender and from the tip of the muzzle to the most distal end of the tail it measures 23.5 cm, which puts it in the 1:50 scale since according to current estimates Elasmosaurus has a length of about 11 meters. Personally I think this is the right size for a mid-range model, details are not sacrificed and the reproduction is not particularly cumbersome.

As for the production material, this is much softer than usual and this is certainly a good thing given the abundance of long and thin parts. Greater flexibility allows you to handle everything without having to worry about being able to break something following an accident or a fall. Then remember that this is a product that‘s also meant for children.

The pose is dynamic but without falling into excessive emphasis. The reptile is clearly swimming by moving its fins as if it was flying in the water. The movement is frozen when the forelimbs are about to start a new “stroke” in unison while the rear ones are returning to a neutral stance. The animal is not simply advancing but is also turning to its right and this can be seen from many small details such as the tail which, acting as a rudder, is bent slightly to the left or the neck which forms a very soft curve to the right. The body itself is not in a static position but also supports the movement as the right front fin is pulled back in order to emphasize the movement. Finally, the neck is not parallel to the axis of the body but at the base it bends downwards and this is line with a study on the center of gravity in Elasmosaurus, which established that it was located precisely in this point of the animal. Having the center of gravity moved so forward probably should have favored immersion and this is probably what we see represented in the model. Unfortunately, this last gem is lost a bit due to the lack of a base that keeps everything suspended. On the other hand, given the broad base of support, there is no stability problem.

So far so good, but every time you search for scientific accuracy in a model, the first question that any collector asks is “Are the body proportions correct?” In this case the answer is no, but actually yes! If we compare the Collecta with the original animal, the neck should be even longer, they seem ridiculous proportions but actually in the animal over eleven meters long, seven are given only by the tiny head and the very long neck. Could it be that the most distinctive feature of this genre was canned? It would seem so. However, the reconstruction is not completely far-fetched, if we take as a reference another member of the Elasmosaurid family, Thalassomedon, almost as if by magic everything fits perfectly. Probably something could have gone wrong at the beginning of the design process; maybe the sculptor used a reference instead of another, who knows. The fact is that, plot twist, this Elasmosaurus is not really an Elasmosaurus but a Thalassomedon, or some other genus with that kind of proportions. Which is not necessarily a bad thing, Collecta in the past already proposed this genre for a deluxe model in 1:40 scale, but I have no doubt in saying that this revisited, although smaller in size, is much better for sculpt and fidelity to the real counterpart.

So what was Thalassomedon? Another Elasmosaurid that lived a little earlier than Elasmosaurus, about 95 million years ago, in Colorado, therefore in the same inland sea we mentioned earlier. The dimensions were comparable, indeed it seems that the “Ruler of the seas”, this means his name, was slightly larger. So for obvious reasons, from now on, any anatomical reference will be made using Thalassomedon as a reference.

Having put a firm point on the proportions, we can continue with the analysis and now turn our attention to the general outline. There are generally no gross errors to report. There is always the classic diatribe to be made about how soft tissues could change the silhouette of the animal in life. Precisely in the plesiosaurs we have exceptional remains belonging to an unrelated genus that show how in vivo the reptile should appear much more voluminous than what we could hypothesize only from the bones. However, just as in today’s cetaceans that have more slender or stocky shapes depending on the ecological niche they occupy or even simply on whether they inhabit more or less cold waters, it is reasonable to assume that the same should also happen in plesiosaurs. It is therefore reasonable to think that while the genera with large heads and short necks, the pliosaurs, were probably more massive, others like the elasmosaurs, which not only had an elongated and sinuous figure but also lived in warm and shallow waters, had to have a shape much more adherent to that indicated by the skeleton alone.

The outer integument is perfect. There are no scales and this is supported by the fossil remains that testify to a skin with extremely tiny scales, furrowed at most by folds that are masterfully represented in the model.

The skull, although very small, is well reproduced by faithfully tracing the fossil. Eyes, nostrils and ears are all in the right position. Only the teeth should be slightly revised to fully reflect the anatomy of the animal. In fact, in Thalassomedon they had variable lengths with some much longer than others and in the mandible the teeth continued backwards beyond the eye. However, this is a more than negligible detail given the size of the model’s head.

We have already talked about the neck before, I would just add that the attachment to the head has been made very well with a leather pocket just behind the jaw that vaguely recalls crocodiles and monitor lizards.

Even on the body there is little to add, except that maybe the writing on the stomach could have been made slightly smaller. The tail is of the right length; even here, we could apply the same speech made before on the additional thickness that could be given by the presence of soft tissues. At the rear end, there is a small vertical caudal fin, by now it is known that in the plesiosaurs this structure was horizontal, but the study that clarified that came out too late to correct this problem. Under the tail, there is also a fold of skin for the cloaca.

The four fins of the limbs have the right dimensions; the hind ones are slightly shorter than the front ones. The fins could be a little wider, based on the imprints of the soft remains found. The attachment to the body is well done, much thick than it would be if you follow only the contours of the bones.

The coloring is overall very good. There is a gray-green base on the back that quickly fades to white on the belly. In short, the typical countershading that is still almost omnipresent in fish, as well as in reptiles, birds and mammals that live in water. This is because if the animal is seen from above, the dark back is confused with the deeper dark waters, while if, on the contrary, it is seen from below, the light belly does not contrast with the light that filters from above. Then, there’s a pattern of dots and light spots on the back and sides that start from the head and reach the caudal fin. This one may seem a little too fanciful at first glance, if you think that it is not too different from what we can observe on a whale shark, it becomes immediately much more natural. The fins are detached from the rest of the animal thanks to the more rosy hues that gradually replace the gray from the base going towards the ends. There is also a further pattern of lines on the fins. It is of the same color of the body and is much better on the hind limbs than on the front ones. The head is well colored too. The eyes, the teeth and the inside of the mouth do not show any signs of smudging despite the small size and narrow spaces. The only element that in my opinion clashes with the whole coloring is the white arrow that surrounds the nose.

In short, is it worth taking it? Absolutely yes. For a ridiculously low price you will have a really good model in your hands. The only drawback is that if you are looking for exactly Elasmosaurus then there are the problems mentioned above, but otherwise I would say that it is a practically flawless reconstruction.

You can find the model here.